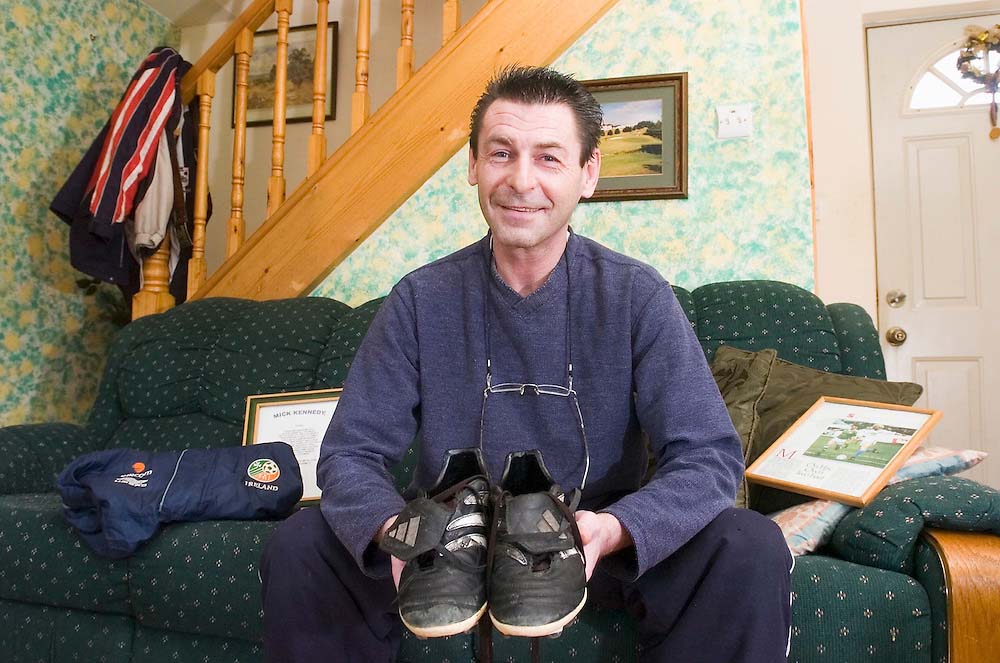 Tributes have been flooding in after the passing of former Portsmouth great and Clare man Mick Kennedy.

The former Republic of Ireland international passed away last weekend at 57 years of age, having spent his later years in Ennistymon.

Mick’s parents hailed from Kilmaley, and moved to Salford where Mick was born in 1961.

His first club was Halifax, and during his career he made over 500 league appearances for 10 different clubs.

Described as the quintessential hard-man in midfield, Kennedy was known for his no nonsense style.

Portsmouth was where he came to real prominence, after he was signed by the then manager Alan Ball for a fee of £100,000. He quickly became a cult figure at the club, and captained his beloved Pompey to the First Division in 1987. He made 144 appearances for Portsmouth, and in 2018 was inducted into their Hall of Fame.

Mick also came to the attention of Irish manager Jack Charlton during this period, and was capped twice during a competition held in Iceland in May 1986. Ireland faced the hosts and Czechoslovakia, and won both games to capture the trophy. It was Mick’s only time to be included in an Irish senior squad, with controversy surrounding an alleged tackle on one of the Czech players. He also made four appearances for the Irish U-21 side, scoring twice, including against former England international David Seaman.

There was uproar at the Portsmouth club when Kennedy was sold to Bradford midway through their first season back in the top flight, with several fans expressing their discontent at the time.

During the latter part of his career, Kennedy moved to a number of clubs including Leicester City, Luton, Stoke City, Chesterfield and Wigan Athletic.

He made the move back to Clare in the late 1990’s, and got involved in coaching with Clare Youth teams and Kennedy Cup squads. This was thanks in part to the involvement of Mick’s uncle Frank Healy who was chairman of the CDSL at the time.

Mick developed a great affinity with the Lifford club in Ennis, and was in charge of the club’s junior and youth sides over a ten-year period from 2000-2010.

He was also manager of his native Kilmaley United, guiding them to the Premier League Cup title.

The FAI have announced it will pay its respects to Mick at the upcoming UEFA EURO 2020 Qualifier against Georgia on March 26 in the Aviva Stadium.

Mick is survived by his mother Mary, brother Larry, sister Noreen and is pre-deceased by his father Flan.

A number of local soccer representatives in Clare have also paid tribute to Mick.

Mick was involved in the management of the Clare Youths when I was playing with them and he brought it to a whole new level in terms of professionalism and got the best out of a good bunch of players at the time. As a result of that, some us were rewarded with the chance to go to Exeter City for a trial, and we wouldn’t have gotten near something like that if it wasn’t for the belief he had in our ability and pushing us to the limit. I have been involved in managing teams for 9 years now and a guy like Mick Kennedy would be worth his weight in gold in terms of what he would bring to a management team. Mick was driven, he was passionate, and was just a fantastic person. When he spoke, people listened. He was the kind of guy you were in awe of and had the greatest respect for. I crossed paths with him again when he managed the likes of Lifford and he always showed huge respect to teams he faced. The tributes that have been paid to him from his fellow pros in the last few days have served him well and he clearly left a huge impression on the people he came across.

I was devastated when I got the news of Mick’s passing. He was a brilliant guy, and I came across him when we worked on summer camps together. He was a fantastic coach, and he got on great with all the young kids that he dealt with. Everyone was so impressed with him, and he loved to talk about the game as he knew it from the time he played. He was a very important member of every team he played for, including captaining the Irish U21’s. I really enjoyed his company and talking about the game. The way he could coach was incredible and that was all down to the fact that he knew the game inside out. He played at the highest level and when he finished up, he proved himself to be a brilliant man in terms of management. He was brilliant at getting his message across which is something not everyone can do. Everyone responded to him and was he was just a great all-round guy.

When he came to live in Ireland, Mick was very anxious to get involved in coaching. We put together a series of summer camps across the county and they were hugely successful because Mick was just brilliant. He was an excellent coach and in particular with the underage players. He was able to deal with every issue that arose and he was just a very likely man. He was a pleasure to deal with and I think that’s something everyone can agree on. He was involved in one of our first youth teams to win a tournament along with the late Hugh Kelly. He was just a lovely guy and everyone that came across him will certainly remember Mick fondly.

Mick was a brilliant person. A fantastic coach and a manager with huge experience. He talked as he knew it, there was nothing fabricated with Mick. Anyone who plays over 500 times in the English leagues demands respects. I showed videos of Mick to my son in the last while and I actually saw Mick walking down the street in Ennistymon and pointed him out to my son as a former Irish international. I worked under him at Kilmaley United and he was a great man to set up a team that would be penetrating and defensively sound. He had a great tactical awareness and guys bought into what he was about. Lads listened to him and played in the way he wanted you to. He was one of the few men who wore short sleeves in summer and winter, and even in the winter he would roll up the short sleeves. Mick was the type of guy who would serve Mass as an altar boy on Sunday and then when he crossed that white line, he would execute you. That’s the kind of person he was.

The thoughts of everyone at Clare District Soccer League are with Mick Kennedy’s family and friends at this sad time.

Mick was a legend of the game who had a distinguished career in the UK before returning to Clare. He managed our Oscar Traynor team and was also involved with Kilmaley and Lifford. He was a great friend to many in the county and helped bring on soccer locally by passing on his extensive knowledge of the game.

Mick represented Ireland twice at senior level – against Iceland and Czechoslovakia in 1986 – having previously lined out for the Under-21 team.

It was with Portsmouth where he played his best football with over 120 appearances made and the club inducted him into their Hall of Fame in 2018.

Mick will be sadly missed by everyone. As a mark of respect a minutes silence was observed for Mick at delegate meeting on Monday night and will be observed at all local games this weekend.