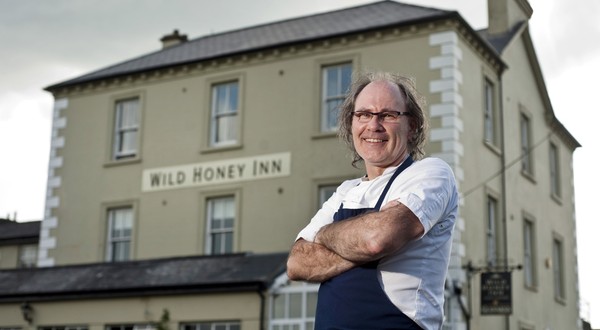 History was made this week when a North Clare pub secured its first Michelin Star, the first public house to receive the accolade in the country.

The Wild Honey Inn, in Lisdoonvarna owned and run by prominent chef Aidan McGrath and his partner Kate Sweeney was awarded a Michelin Star in the 2018 Michelin Guide Great Britain and Ireland earlier this week. This wasn’t the only Clare success at the awards event, as Sixmilebridge woman, and head chef at the Five Fields restaurant in Chelsea, London Marguerite Keogh retained the Michelin star she received last year at the same event.

The Wild Honey Inn has been a Michelin Bib Gourmand holder since 2010 and becomes the only newcomer to join what is now an 11-strong list of Michelin Star restaurants in the Republic of Ireland.

Rebecca Burr, editor of the Michelin Guide Great Britain and Ireland, said, “It’s such good news that Ireland has its first pub with a Michelin Star. The Wild Honey is lovely. Ireland produces some fantastic ingredients and Aidan is an experienced chef who uses some of those beautifully. We’re really pleased for him and the team”.

With a history that dates from 1860, the Wild Honey Inn was refurbished in 2009 and its food places emphasis on the French classical genre, using wild, local produce prepared and served in a refined bistro style.

Marguerite Keogh, outlined what it has meant to her to retain her Michelin Star.

“It’s amazing, it is absolutely amazing, it’s the top of your career as a young chef that is what you work towards and you never think you will get it. It’s great to see for the lads in the kitchen, it is a team effort and without them you wouldn’t have it. It is so emotional as well because it is everything you’ve worked for and it is great for the business as well,” she said.

Marguerite is the head chef at The Five Fields restaurant. She trained in Dromoland Castle for five years and took up a position in London in a Marco Pierre White restaurant before moving to Marcus Wareing’s restaurant Petrus, which was owned by Gordon Ramsay before Marcus bought it from Gordon.

“I worked there for six years and then I got offered a job in the Five Fields. I worked on the restaurant from scratch so we are four and a half years old, and we have had our one star for one year and retained it this year again. This is my first time being head chef. The owner is Taylor Bonnyman and the two of us worked together on the menus,” she said.

Describing her food, she said “everyone classifies us as modern English but it’s different influences because Taylor worked in New York for quite a bit so he has quite strong influences from the top chefs in New York”.

Adding to the star successes Morrissey’s of Doonbeg was awarded a Bib Gourmand awards and was named as one of seven newcomers joining the list of 20 Bib Gourmand recipients in the Republic of Ireland.

The Wild Honey Inn owners were unavailable for comment however, Shannon Group Chairman Rose Hynes said, “Anyone who has had the pleasure of experiencing the Wild Honey Inn and meeting proprietors Aidan McGrath and his partner Kate Sweeney will know that they deliver a very special culinary experience. Their pursuit of excellence has deservedly earned the Wild Honey Inn this Michelin Star and we commend them for that.

“They are more than just proprietors of a great establishment and creators of very special food. They are vocational in their pursuit of quality and you know from the minute you walk in or if you get a chance to meet them that this is an absolute passion of theirs. It translates to the plate and it’s no surprise whatsoever that they have received this high recognition. One of the great things about them is their support for the locally sourced food from the Burren region,” she said.

She outlined that the culinary experience across the Wild Atlantic Way is one of its real strengths.

“We also have Morrissey’s pub in Doonbeg, and Kai Cafe and Restaurant in Sea Road, Galway City recognised in the Michelin Guide ‘Bib’ Gourmand awards. Having this level of Michelin recognition across the region only adds to the wider experience that locals and visitors alike can have in this special part of the world,” she concluded.

Carol Byrne is a reporter at The Clare Champion newspaper reporting on news in the East Clare area and the arts. She also covers the courts in County Clare and has received seven national awards for this coverage from the Law Society of Ireland and a National Lottery Local Ireland national media award for Best Community Story 2019. A Masters in Journalism graduate of NUI Galway, she also holds a Bachelor of Arts from the University of Limerick in Music and Media Studies, and a Higher Diploma in Irish Legal Studies. She began her career interning at The Limerick Leader and Clare FM, before taking up a full time post at The Clare Champion in 2006.
@@Carlsburn
Previous West Clare Man Facing Trial Over Fatal Inagh Crash
Next Harty favours access to abortion in certain circumstances