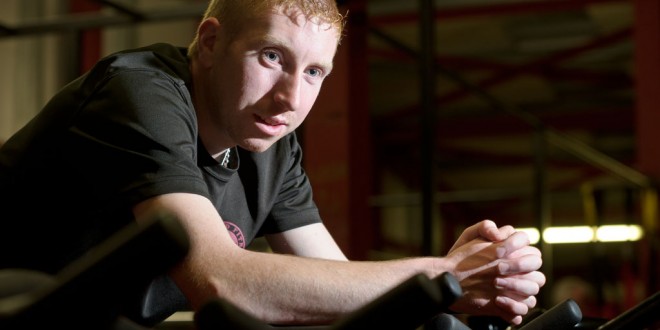 Michael Lorigan in the gym. Photograph by John Kelly.

Michael looks to a positive future

ON the morning of May 17, 2012, the course of Michael Lorigan’s life changed forever.

He remembers nothing about the single-vehicle accident near Cranny Cross on the Kilrush-Ennis road but, these days, he is reconciled with accepting and dealing with the consequences.

The now 25-year-old from Kilmurry McMahon, who was hospitalised for three and a half months, has been left partially-sighted, along with an acquired brain injury.

Ironically, if you didn’t know about his injuries, you wouldn’t guess that Michael had been badly injured.

“I was told in the hospital that it’s a hidden disability. I’ve met a lot of people and, to look at me, they would never think I have a sight problem. There are certain things that I see and some things I wouldn’t,” he explained.

One source of relief is the fact that he was on his own in the car. He doesn’t know how he would have coped if he had a passenger.

“Thank God. That’s a major blessing. If there was someone with me, I wouldn’t like to see what kind of state they’d be in. It was a saloon car and it was about the size of a hatchback when it was finished. So I was told anyway. I’m lucky in that I don’t remember.”

Michael is very clear when apportioning blame. He simply looks in the mirror.

“I could blame so many different things but the real culprit behind it would be yourself. I could point the finger, blame this, blame that, but it all comes back to one person. Myself,” he asserted.

Of course, his driving days are now over. “A lot of people would say that’s a good thing,” he laughed.

In his view, his car wasn’t built for speed, although he says that from when he started driving, his parents were concerned.

“I suppose you could say it was built for speed but it was a standard engine. It was a two-litre petrol. It wasn’t turbo or anything. Since the day I got on the road, they were nervous,” he acknowledged.

His initial prognosis was not what any parent ever wants to hear.

“It must have been terrible for them because what they were told would have been totally different to where I am now. At the start, they were told I was pretty much dead. Then they were told that I was going to be paralysed and would have to be straw-fed. Now I can gladly stand up and say ‘look at me now,” he said, following a gym session in Kilrush last Thursday.

Although he wasn’t a man with an interest in school, Michael has recently started giving talks to secondary school students. He hopes his story will resonate with them and he finds it somewhat therapeutic.

“I came home from hospital and I started going to an Acquired Brain Injury (ABI) house in Clarecastle. I was there for a while and then I got this brainwave – I’m a young fella; I’ll go to schools and give young kids talks. Not a boring educational talk because, if I was young, I wouldn’t like to listen to that. I’d be throwing in the full house but I’d be getting the point across without boring them,” he smiled.

“I talk about road safety, my life and my love for cars. I talk a bit about the brain injury and what parents would go through, if something terrible happens. I like to throw in the whole lot. I tell them the direct facts. I’d be hoping they take something in. If they take in anything, it would be worth it,” he feels.

Michael has no issue speaking in front of groups.

“It doesn’t bother me. They kept asking me that in Head Way in Limerick. They were asking me was I nervous about talking in front of people. That doesn’t faze me at all. Head Way deals with people with traumatic brain injury or an acquired brain injury,” he said.

Long-term, he knows that his career choices are somewhat restricted. However, he is taking steps to ensure that, someday, he can return to the workplace.

“I never did study. I left school when I was 15. It was tough enough to even stay that long. I went plumbing but that fell through because of the recession. Then I started doing ground work and driving machinery but all that finished. I’d be lucky to get a day’s work here and there. At the time of my accident, I was unemployed but I was in the process of looking up a mechanical course. At the moment, I’m in Headway doing a FETAC Level 3 training course. It trains you on going back to work and how to go about it. It’s interesting and something I never thought I would do,” he reveals.

He accepts, though, that his career choices will be limited.

“With the position that I’m in now, it’s very hard for me to point to a career I would like to do because of my interest in school, which was none.”

Although generally positive about his situation, Michael finds the commute from Kilmurry McMahon to Headway in Limerick challenging.

“That’s the worst part of my day. My mother drives me to Ennis and then we get a mini bus from there to Limerick. My mother or father pick me up in Ennis in the evening.”

On a personal note, his accident has taught him that the depth of friendships are exposed when a crisis like this strikes.

“You can have a big number of friends but, when something like this happens to you, you have a very small number left. You know who they are then. That’s a big fact I have learned. When I was in hospital, a couple of them came to visit me. There are still two friends there who, I’d say, no matter what, would hang in there,” Michael reflects.

After his long stint in hospital, Michael came home. Adjusting to that was difficult.

“To be honest, I wasn’t in the frame of mind to take in what they were telling me in hospital. Anything they were telling me, I was saying ‘yeah, whatever.’ I just brushed it off but, when I came home, it was a totally different ball game. I could hardly see two feet in front of me. It was a matter of adjusting to something new. It was the same as buying a new car. It would take you a while to get used to it,” he jokes.

“When I came home first, I was very bad. My foot, instead of being in a straight line was off to the left. I was walking in a crooked line the whole time. A bit of rehab semi-sorted that and getting your mind around it helps.”

Despite everything, Michael still loves cars. He can’t let go.

“To be honest, I don’t know where it came from. I suppose it was maybe seeing a lot of them around. Then, bit by bit, I got interested in knowing how they ran and what was what,” he explained.

Part of his rehabilitation involves attending the K Fitt gym in Kilrush. Having not regularly darkened the inside of a gym prior to this, he finds it physically and mentally beneficial.
“I’m coming here a couple of months. I didn’t know what was involved. It was totally new to me but it is something I’m glad I did,” he said.

Instead of feeling sorry for himself and wondering why this happened, Michael does his best to retain an upbeat outlook.