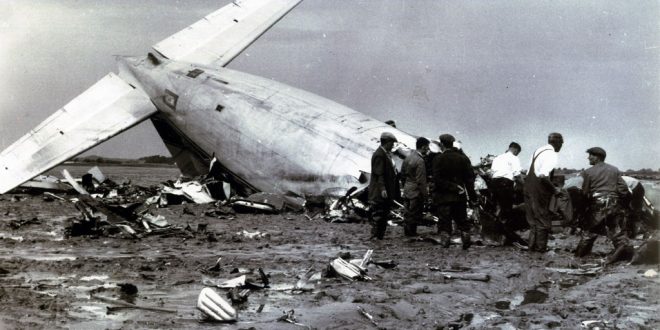 The scene of the fatal crash in Shannon in 1961.

THIS Saturday is the 55th anniversary of the worst air crash in Shannon’s history and one family are travelling from Austria to commemorate the tragedy.

Eighty-four people were killed when a President Airlines Douglas DC-6 crashed into the Estuary on September 10, 1961.

Thirty-three-year-old Ferdinand Berger was one of those on board and his death left his wife and three children bereaved. This weekend, his two daughters, Eva and Christa, are visiting with their families.

They have been in contact with Fr Tom Ryan over recent months and, speaking about their arrival, he said. “I was contacted during the summer by the Berger family, to help organise a memorial service this Saturday for their father, who died 55 years ago in this crash.

“Their contact led me to do a bit of investigation into all that happened in that era in Shannon, which is fairly well documented. Unfortunately, at that time, so many people lost their lives. Everyone who lost a life was a family member and family members treasure their loved ones. On this occasion, the Berger family are travelling from Austria to Shannon, it being the place where their father lost his life on September 10, 1961.”

Fr Ryan said the visit will also give the Berger family a chance to meet people involved in the rescue efforts.

The Clare Champion of September 16, 1961, outlined what had happened at Shannon just days previously. “The big jets, roaring westward out of Shannon Airport on Sunday and Monday, flew over a scene of horror on the mudflats about a mile from the end of the runway. There, on the mud and water, rescue workers toiled against the incoming tide to bring 83 bodies ashore from a wrecked airline.
“The airliner, a DC6 of President Air Lines of California, had made a refuelling stop at Shannon and took off in darkness at 3:53am on Sunday. After it had cleared the runway, it crashed into 10 feet of water and mud in the Fergus estuary. It was the worst disaster in Shannon’s history.”

Describing the rescue efforts, the report stated, “Rescue launches were quickly on the scene and one girl was picked up. She was alive but very badly injured. Mr Ralph Parkes, one of the rescue squad, gave her some brandy and said an act of contrition in her ear.

“He told reporters lately that she seemed to understand what he was saying. Despite heroic work by three doctors, she died three hours later.

“Also on the scene were Rev T Comerford CC, Rev D Woods CC and Rev P Cloonan CC, all of Newmarket-on-Fergus. Fr Comerford said that the scene was ‘just desolation’. He said there was little they could do, as there appeared to be no sign of life near the wreck.

“All day long on Sunday, the launches made their sad journeys to the airliner. It was a slow process, as progress was made difficult by the thick, glue-like mud. The bodies were brought from the scene to a boat-house about a mile away and then conveyed by ambulance to the fire brigade station, which had been converted into a temporary morgue.”

A short memorial service will take place in the Adoration Chapel, Skycourt, on Saturday morning at 10am to honour Ferdinand and to pray for all who died on that day 55 years ago.