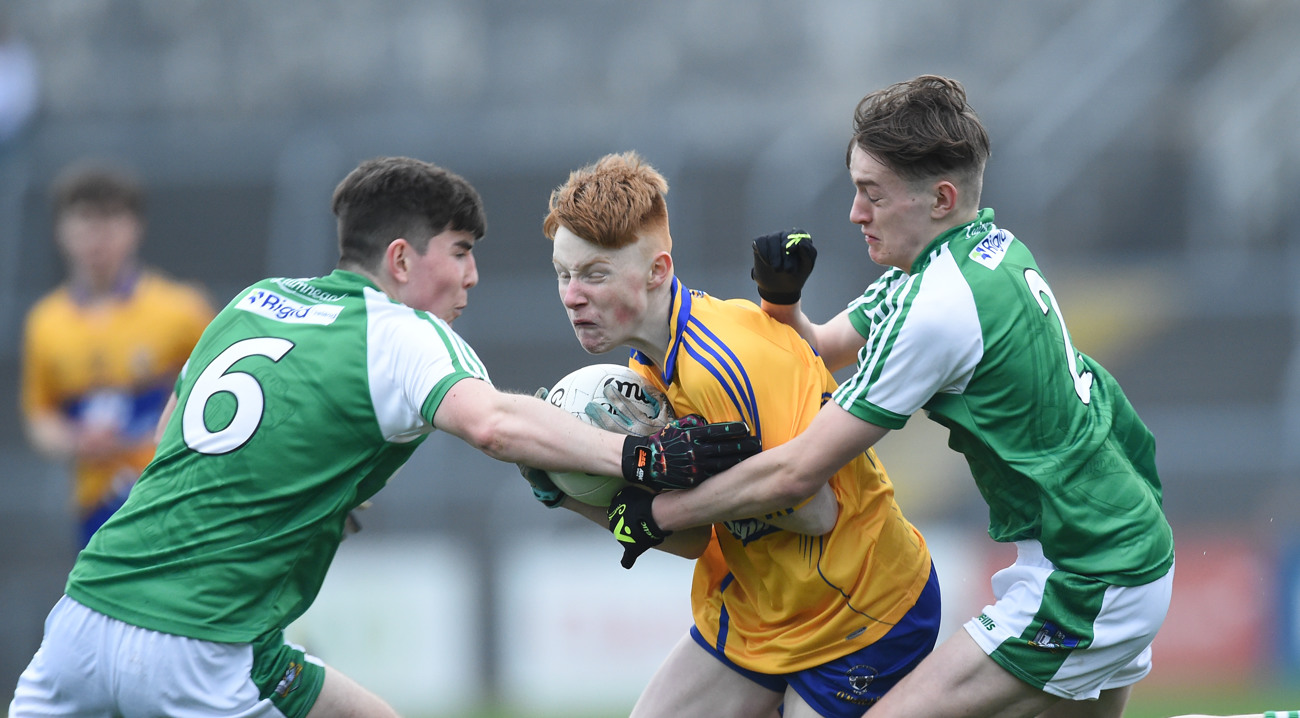 Shane Meehan of Clare in action against Micheal O Hanrahan and Shane Bradshaw of Limerick during their Munster Minor football quarter final at Cusack Park in 2018. Photograph by John Kelly.

FOR the sixth successive year the Clare minor footballers have beaten Limerick in the Munster championship. The county U/17s won this game in the first half with a blistering display of attacking football. They moved the ball at speed, their control was impressive, as was their tackling, although that deteriorated somewhat in the second half. Clare have now qualified for a Munster semi-final on May 8 while Limerick will be in action again next Wednesday, when they play Tipperary.

Clare were in complete control at half-time, leading 2-9 to 0-4. Inside forwards, Shane Meehan and Mark McInerney, were absolutely deadly in that opening half. Meehan’s movement and ball retention was brilliant as was his finishing. The Banner club player put 1-5 on the board in a superb opening half hour of attacking play. He pointed 0-3 from play and the goal was an opportunist one, just before half-time. Limerick goalkeeper, Kevin Walsh, was unlucky to spill a McInerney delivery, allowing Meehan to pounce and roll it home.

Earlier, McInerney had goaled for Clare in the fourth minute. Clare centre-back and captain, Cillian Rouine, cut through the Limerick defence before off-loading cleverly to McInerney, who flicked the ball home with his hands. He had already pointed from play, while Kildysart’s Emmet McMahon put over 0-2 from frees.

Limerick had one decent goal chance in the opening minute of the game but a John Hayes shot was expertly and bravely blocked by a combination of McMahon and Clare goalkeeper, Michael Garrihy, who cleared the size five.

Patrick Gallagher pointed three frees for Limerick in the first half while full-back, Craig Carew, was the only player in green to point from play during the hour for the visitors.

As energetic and all action as Clare were in the first half, their performance level dipped appreciably after half-time. Meehan and McInerney still looked sharp however and combined combined nicely, eight minutes from time, as the Éire Óg man slotted his second goal to the net.

Limerick showed admirable heart as the game wore on. They goaled twice in the second half as John Hayes and Paul O’Shaugnessy netted.

While Clare will face much sterner tests as the championship evolves, they were well worth their seven point win. While the inside forwards showed their finishing class all through, Clare also had impressive performances from midfielder Emmet McMahon, Cillian Rouine and Jack Reidy.

West Clare native Peter O'Connell has worked for The Clare Champion for 12 years and covers everything from sport, especially GAA, news, features and has been even known to branch into the fashion scene on occasion.
@@westclarepage
Previous Shannon Airport to aid farmers with silage cut
Next Aer Lingus changes to Shannon-US winter services