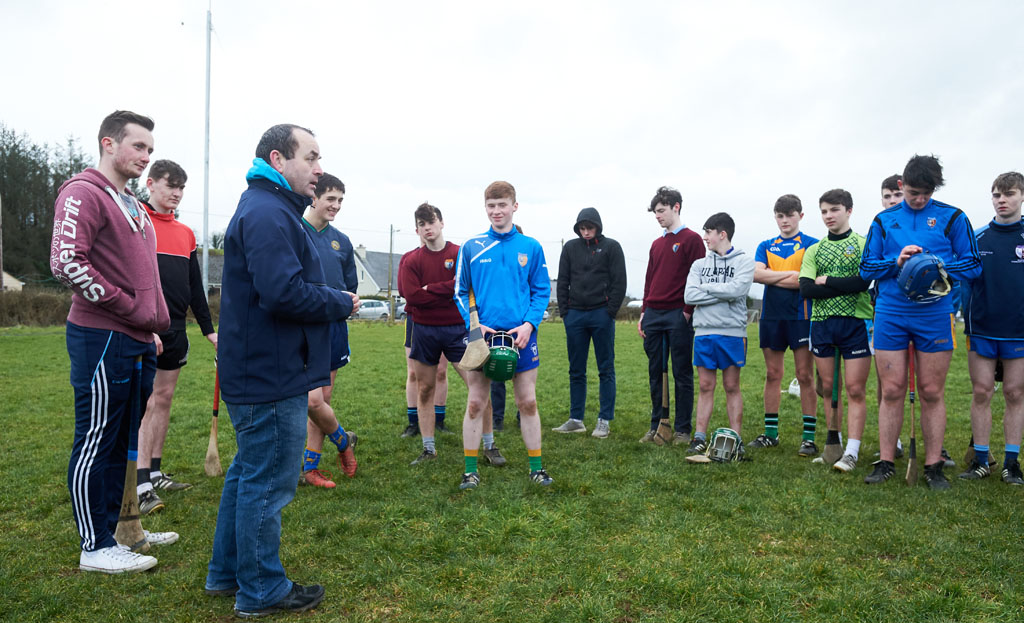 McNamara confident Scariff can deliver on the big day

Sean McNamara’s involvement in the promotion of Gaelic Games won’t surprise anyone that knows his family.

His father Mickey has given long service both with his native O’Callaghan’s Mills club, where he served in many administative roles over the years, including that of club secretary and also with inter-firm GAA in Clare when an employee of SPS Shannon.

He is also particularly well-known for his work in the promotion of scór at county, provincial and national levels.

Sean has also served his home club in many capacities while, in recent years, his main GAA involvement has been with Scariff Community College, where he has taken charge of many teams since joining the teaching staff almost a decade ago. He now manages a senior side he has seen progress through the various age groups over the past five years.

“Our captain, Michael Hynes, captained the school to a Munster U-15 D title and many of that team went on to claim an U-15 C title a year later. There are only a few of this squad that did not feature in those wins and they include Ciaran Keenan, Fergus Madden, William Kavanagh and Donal Burke.

“This year’s U-15s won the Clare schools title and on the way to that win, they defeated St Flannan’s and St Joseph’s Tulla, both of whom were playing in higher grades in Munster. They were two big wins for the school and instilled great confidence and all of those players are still with us,” noted the Kilkishen native.

Nine of the side that will start Saturday’s final will be still available next season, “which gives us something to work with when we will be playing in the B grade”.
The clubs from which the players come have been a great help added McNamara.

“They have a lot of work done with these players, while they have continued to give us every help throughout the season. We have also received huge assistance from county coaches, Jimmy Maher and Peter Casey. Jimmy has been taking these players once a week since his appointment as a games development officer with Clare GAA while, prior to his arrival, Peter Casey did similar work.

“Kelvin Harrold, who is in charge of the strength and conditioning with the Clare senior hurlers, has also been a great help to us,” explained McNamara, who is assisted in the preparation of the side by Niall Minogue (Scariff) and Diarmuid Whelan (Broadford), both students at Mary Immaculate College in Limerick who are currently on co-op in the Scariff school.

“We have been fortunate to have had the use of the Scariff GAA AstroTurf pitch throughout the season. Given the adverse weather conditions, pitches haven’t been playable, so the availability of the AstroTurf facility has been of major assistance,” he added.

On their way to the Munster title, Scariff played their games against PBC from Cork and Kinsale on an AstroTurf surface at Mick Neville Park in Rathkeale. The experience of having trained on a similar facility at Scariff proved very beneficial.
While McNamara is confident in the ability of his charges, he believes that St Fergal’s will be tough opposition.

“In the Leinster final, they had a player sent off after 25 minutes. At the time they were seven points down but they fought back with 14 men and won by seven. In the All-Ireland semi-final against Kinvara, they were also well behind but fought back to win. They have been finishing strongly in their game. We know we are facing a big test,” he noted.

“I am hoping we can continue to get the goals, which has been a feature of our progress to this stage of the competition. Patrick Ryan (he was sent-off in the semi-final) will be a big loss but his absence gives someone else in the panel an opportunity to impress. Patrick got us out of trouble in the match against PBC when we were struggling and the lads will be determined to win this one for him.”

All involved with the team have been hugely impressed by the support they have had throughout this campaign.

“Our semi-final game was played in Dublin on a Wednesday but it didn’t prevent a big crowd from travelling to support the team. Now that it’s a weekend fixture, there will probably be a bigger crowd at the game. The players who come from seven different clubs, work as one big family and there is a great bond there and, hopefully, that will be evident again in the final,” the manager concluded.

The final throws-in at Toomevara at 2pm.