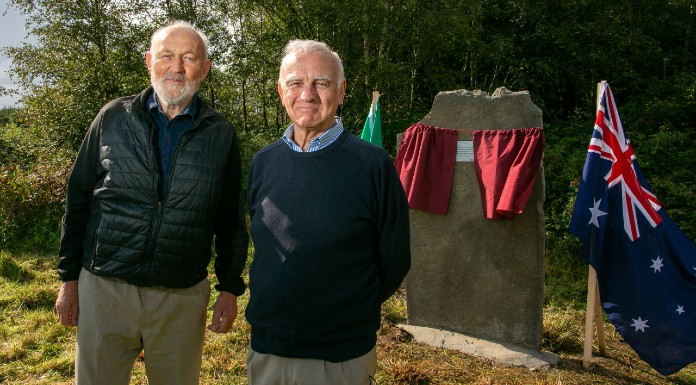 Patrick O'Dwyer (left) and John McMahon (right) on the site of the McMahon ancestral home in Bonavilla. Pic by Arthur Ellis

When Ralph McTell penned those now immortal lyrics of ‘Clare To Here’, it captured that sense of being away from home when there was nothing to keep the emigrant rooted.

For Melbourne native John McMahon, the distance to Clare might still be the same as it was in 1864 but the circumstances of his journey compared to that made by his ancestors are light years apart.

John’s great-grandfather was born in the townland of Bonavilla just outside the village of Mullagh in West Clare. He was a tenant farmer like the vast majority of his generation, but with 20 acres and a horse at his disposal, Pat McMahon was a little more prominent than most. He and his wife Brigid (neé O’Connor) had four young children with ages ranging from the eldest at 8 years old to the youngest who was just 1 year old at the time of their upheaval.

The fact that Pat had a horse to aid in farming the land was something which stood out in West Clare for its time. The more common form of assistance came from a donkey or an ass, so it was no real surprise when the local landlord called with a view to having the horse for himself. This proved to be an attempted purchase which would change the course of the family’s history forever. John explained how the approach was received.

“The landlord came to buy the horse from my great-grandfather but being a landlord, he wanted to buy it on his terms. My great-grandfather refused this approach and instead sold the horse privately even though he knew the consequences it would bring. We are not sure exactly what transpired but there are a few stories. One is that they were evicted from the house as a result of this while another is that the rent was raised as something of a reprisal which made it impossible for them to stay. The truth is probably a mixture of both, but either way it led to the family being evicted. They took the decision to move and Australia was the destination” he said.

The site of the original McMahon household is on the land now owned by retired secondary school teacher Patrick O’Dwyer. A chance meeting with the returned descendant of a family who were thought to have made the move to the United States was the beginning of a bond of friendship which culminated in the unveiling of a commemorative plague at the site of the old McMahon cottage. Patrick explained that hearing the news of the McMahon’s destination came as something of a surprise, particularly given the strong connection between the two families.

He said: “I remember hearing from my own father about the McMahon family but the story was told locally that they had gone to the United States. The connection between the O’Dwyer’s and McMahon’s was always there because my great-grandfather Peter was godfather to one of Pat and Brigid’s children. We also think that before they left, my great-grandfather bought livestock from them so they had money with them for the journey. It must also be remembered that at the time, Australia was making the transition from being a destination for convicts and were trying to encourage competent farmers and their families to set up there”.

The journey facing the McMahon’s was one fraught with danger as they made the crossing to the other side of the world with their four children in tow. This was highlighted by the fact that the boat which brought them to begin their new life would burn down shortly after its arrival.

It was also financially prohibitive with the princely sum of £60 required for their passage, which was a considerable amount for a tenant farmer in West Clare to produce at the time. There is some speculation that their passage to their new home was either paid for or subsidised in some form as part of a scheme at the time to encourage those with an agricultural background to relocate to Australia.

Brigid’s sister was already living in Australia at that time and was making a living in the pub trade. When the McMahon’s first arrived, they spent some time in Tasmania but eventually made the move to Melbourne where Patrick also got involved in the pub trade and built himself up from there.

During his formative years, John was always aware of his Irish heritage and it was something that was celebrated and nurtured. He recalled how there were several nights where traditional Irish music would be played in their home and they were raised with a strong Catholic faith. While his Irish background was something he embraced, it was not until later in life that he began to investigate it. The decision to trace his lineage would ultimately lead him back to West Clare and a chance meeting with Patrick O’Dwyer. Patrick, who was manager of the Kilmurry Ibrickane senior footballers at the time, explained how that first encounter came about.

“It was in the lead-up to the All-Ireland club football semi-final in early 2005 and I remember it was a really busy time where we were trying to get everything in order. We had just won the Munster final and everything was focused on the game that was now just around the corner. I was doing some farm work one day and had to go to Casey’s shop in Mullagh village. When I went in, I heard this Australian voice mentioning something to the owner about a landlord and a horse, and I honestly couldn’t believe it. At first I thought it must be wrong because we had always been told that the McMahon family had moved to America, but I had heard their story so often that when I came across John, I knew there must be something in it. We arranged to meet for lunch at my house the next day and from there we started digging to find out exactly what had transpired” he noted.

Having travelled from the other side of the world to trace back his ancestors, John, who works an addiction counsellor, admits it was an emotional moment to see the site where they had made their journey from nearly 150 years previously.

“It was really poignant when I first saw where their little cottage had been and it was both a humbling and proud moment to think that I was now standing on the ground where my great-grandfather had come from. Even thinking about it to this day makes me emotional because we now have that visceral connection of being able to point out the spot that was theirs” he said.

It is not just piecing together the history of his own family tree that John has borne the fruit of with this ancestral journey. With a surname like McMahon, he admits that he was accepted as a local the moment he arrived in West Clare.

He recalled: “One of the first nights I was here, Patrick brought me to the Blondes (Cleary’s) pub in Miltown Malbay. Midway through the night, he introduced me to the crowd as John McMahon and the immediate reaction from everyone there was to say welcome home. That meant a lot because this is a part of my home and where our people came from and that is something we hold dear. In some ways it made me grateful to that landlord for forcing my great-grandparents into leaving, because if that had not happened, then I would not be here” he laughed.

While the story of the McMahon’s of Bonavilla is a deeply personal one for John, he hopes that his success in tracking down where his family journey began will help others who may be considering a similar undertaking.

“From the outset, I wanted this to be about more than just Pat and Brigid McMahon. There is a vast diaspora out there with stories just like the one my family has to tell and I hope people who are beginning to think about their own heritage follow through on it. I think that connection with your roots is something that you really only start to think about or value when you get older. I think a lot more of the disapora are now beginning to take more of an interest in their lineage that had been the case in recent times. Maybe it too strong to say that people were disinterested in it, but there is certainly more of an uptake of this type of research in the last few years” he said.

The stories of the O’Dwyer’s and McMahon’s in Bonavilla are forever linked and there is now a commemorative stone standing on the site of the original cottage as a permanent reminder of where their journey began.