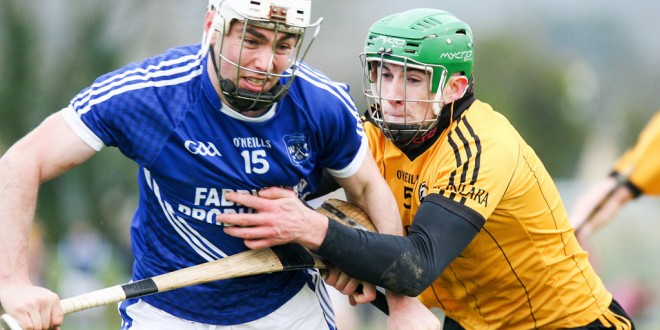 McGrath Honoured To Be Captaining Cratloe In Clare SHC Final

Whatever happens in this Sunday’s county final, you can be sure it won’t faze Cratloe captain Conor McGrath.

The former All-Star, All-Ireland winner and county champion is the epitome of composure. McGrath has had a stellar year for Cratloe since returning from injury and he says it feels good to lead his side into another county final.

“It’s a great honour to be the captain of this side heading into the county final, but to be honest, there isn’t a whole pile I’ve to do. We have many leaders involved in the squad, so it is not an onerous task for me, but at the same time it is a great honour to captain the club and the parish in a county final.

“I had a small job done on my shoulder just before Christmas and I took care took care of it for four or five months. I got back for the last four or five rounds of the Clare Cup, and it was great to get those games in. Once the championship started then it was week in week out with both codes and it feels like a long time now since the surgery so, just delighted to have made our way back to a final after the disappointment of last year’s final. That isn’t easy to do. You never know when you’ll get back there again, and it may be never so we’re looking to make the most of Sunday,” Conor confessed.

The 28-year-old is acutely aware that this is the first meeting of the two neighbour clubs in the fight for Canon Hamilton but he says that is of little consequence as Cratloe strive to win their third hurling title since 2009.

“I suppose it does add that extra bit of spice to the occasion. Maybe more so for people that aren’t involved in the team and go between both parishes every day or whatever. For the players, we were busy with football up until Sunday so we haven’t noticed anything substantially different from any other county final we were in. Obviously, it would be great to win and to beat the neighbours, but it is the same for Sixmilebridge, and it will be a blow to whichever team comes out the right side of it.

“We have lost one final, last year, since we won in 2014, and we had lost a few on the run up to that one, so they’re not easily won and finals can take on a life of their own. We have been very consistent over the last ten years or so, getting to our sixth final. We would like to get the business done on Sunday to get our third title, and we would like to win more than one title every five years, but we will be more than happy if we can keep that trend going this Sunday,” Conor stated.

Cratloe’s dual exploits have been much discussed in recent years and while it may be perceived as a negative that they roll into the hurling final on the back of a defeat in the football semi-final, Conor doesn’t see it this way.

“We’re very lucky in the sense that most clubs that lose a semi-final or an important game have to wait 12 months to get another crack at it, and obviously we have to do that from a football perspective but, we have just seven days to turn around with a great opportunity to win a hurling final so I think we’re very lucky in that respect. It’s a great opportunity to bounce straight back,” Conor said.

Bouncing back has been no issue for Cratloe thus far this year and they have left the memory of last year’s county final defeat to Ballyea well behind. They have also fought resolutely to overturn deficits in their last three games with strong second half showings following mediocre first half displays.

“Ballyea were deserving winners last year and took over the game in the second half but any time you lose a final you want to get back there and go one step further. It hasn’t been easy to get back here, we were beaten by Inagh, and then have had three tough games in the period since so we don’t underestimate the effort it has taken to get back here.

“We were very happy with some of the things we did in the second half against Crusheen, and other things not so much. We definitely weren’t expecting to beat Crusheen by that amount as we have had some very tough battles with them in recent history. I think the goals we got just after half-time gave us massive momentum and did the opposite for them. While it was great to put up a big score, we know we won’t do that often and Sunday presents a totally different challenge. We’ll try take the good from that game into Sunday, but we will also need to improve on little things that need it,” Conor believes.

Conor believes the trials and tribulations Cratloe have been through since their 2009 title will stand them in good stead if push comes to shove on Sunday, while also paying tribute to the difference the younger players have made to the squad.

“A lot of this team have been around for 10 years or more and we have experienced plenty tough positions in the past that we have learned from and if we are behind at any stage Sunday, we can call those to mind.

“In some ways it feels a long time ago and in others it doesn’t feel long at all. We have played a lot of matches since then, and players have moved on, underage players from that period are now the stalwarts of this team. It is great to get a burst of youth coming into the squad every couple of years. We’re conscious that we’re not always going to be here, so we need to make use of the good team we have at the moment. There is a lot of good work being done at underage and at the school, so it is great to have that fresh blood coming through,” Conor concluded.

Previous Morey Looking For Improvements In Clare SHC Final Showdown With Cratloe
Next Crowe: We Are A Very Proud Club In Sixmilebridge