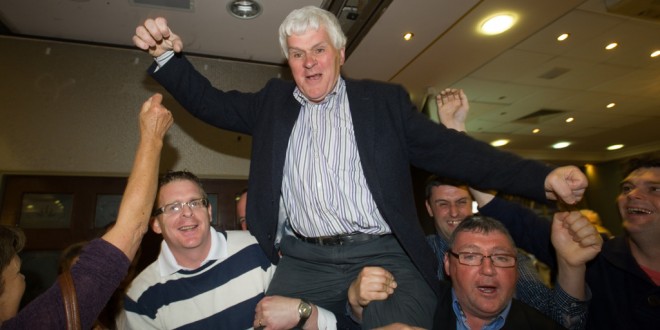 Pat Daly, Fianna Fáil, will; be Mayor of Ennis next year. Photograph by John Kelly.

Seven out of the eight Clare County Councillors elected to the Ennis area will hold the title of mayor over the coming five years, it emerged this week.
Fine Gael’s John Crowe, from the Shannon Municipal District, was elected Clare’s first citizen on Friday, after days of negotiations between his party, Fianna Fáil and the technical group made up of independents and the local authority’s only Sinn Féin member. The Sixmilebridge man will be the only Fine Gael mayor of Clare during this council term.
However, at Tuesday’s meeting of the Ennis Municipal District, the only municipal area where the title of the chairperson is ‘mayor’, Fine Gael’s Johnny Flynn was elected as Mayor of Ennis. This is due to the fact that Ennis has a population in excess of 20,000.
His fellow Ennis councillors, Independent James Breen and Fianna Fáil’s Tom McNamara, will both hold the county’s first-citizen role during this five-year term.
The Mayor of Ennis position will be filled by Fianna Fáil’s Pat Daly next year, followed by independent Ann Norton, Fine Gael’s Paul Murphy and, finally, Fianna Fáil’s newly-elected Clare Colleran Molloy.
The chairmanships of each of the municipal districts, formerly the electoral areas, as well as the positions on various local and regional committees, were carved out during lengthy negotiations ahead of Friday’s AGM.
Clare County Council is made up of 12 Fianna Fáil councillors, eight Fine Gael ones, seven independents and one Sinn Féin. It was no surprise, therefore, when it was revealed that Fianna Fáil, with the majority of councillors, will hold the county’s mayoral post for two years of the five-year term. However, Fine Gael will have just one mayor during that time, with the technical group getting a mayor next year and in the council’s final year.
Nominations are taken for the position of Mayor of Clare at the annual general meeting of the council each June, at which they are formally proposed, seconded and elected. The power-sharing agreement, adopted by council members, means these decisions are made by agreement in advance of the AGMs.
Independent councillor James Breen, from Ennis, is expected to be selected as mayor next year, with West Clare Fianna Fáil candidate, Bill Chambers, taking on the role for the 2016/17 year. Fianna Fáil will again hold the first office in the county the following year, 2017/18, when Ennis’s Tom McNamara is expected to be named Mayor of Clare, followed by Clonlara’s independent councillor Michael Begley.
Fianna Fáil’s Tony O’Brien was elected as deputy mayor for this year but negotiations resulted in Fine Gael securing three deputy mayors for this council term. Fianna Fáil councillors will hold the position in the first and final year of this council.
The inter-group negotiations ahead of last week’s AGM also saw agreement about who would hold the chair for each of the electoral areas over the coming five years. Councillor Johnny Flynn was formally appointed Mayor of Ennis on Tuesday while on Wednesday Fine Gael’s Joe Cooney, who received the most votes out of any Clare councillor in the recent election, was selected as the chairman of the Killaloe area. The only other Fine Gael councillor in that municipal district, Pat Burke from Whitegate, will also hold the role in two years time.
Chairmen of the West and Shannon municipal districts will not be selected until they meet later this month. It is understood that Cathal Crowe from Fianna Fáil will take on the role in Shannon while his party colleague Lissycasey’s PJ Kelly will be chairman of the new West Clare municipal district.