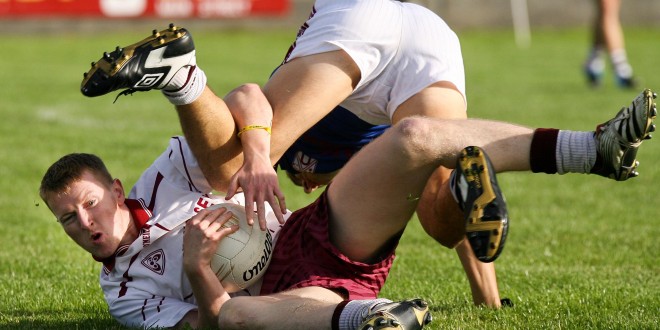 Lissycasey's Francis Hayes gets tangled up with Declan Malone during their round 3 match at Miltown on Saturday. Pic Arthur Ellis.

WERE it not for Colin Lynch, Lissycasey may not have been playing senior football at all in 2013.

Lynch, who is part of the Ennistymon management, along with Mark Shanahan and Cathal Crowe, came out of football retirement last year to assist his native club in retaining their senior status. He kicked three points in their relegation final replay defeat of Miltown. An integral component of Lissycasey’s 2007 championship winning team, Lynch has to put his personal affiliations aside on Sunday in Clarecastle. Everyone involved with Ennistymon will remember how poorly they played at the same stage last year, when they lost to Kilrush in Quilty.

Memories of that implosion will motivate them this weekend as they attempt to reach the semi-final stage of the senior championship. When that will be played nobody knows but that doesn’t dilute the desire of Ennistymon and Lissycasey to reach that stage.

To reach the quarter-final Ennistymon defeated St Breckan’s in Round 1 and O’Curry’s in their second round game. Given their recent history of winning minor and U-21A championships Ennistymon were expected to win those games but from here on the bar will be risen significantly.

Lissycasey were beaten in Round 1 by Doonbeg but since then have beaten Shannon Gaels and St Joseph’s, Doora-Barefield to reach the last eight. While they played some good football against Doonbeg in their opening round defeat, Lissycasey were unimpressive against Shannon Gaels.

They upped their game significantly against St Joseph’s but contrived to almost throw away the result in normal time.

With just 13 minutes remaining Lissycasey led 1-7 to 0-4 and had a man advantage. Come the 60th minute however the teams were level and the momentum was with St Joseph’s. Lissycasey had to dig deep in extra time and they did just that, holding St Joseph’s scoreless and putting over three invaluable points themselves.

Having found the answer in adversity will buoy Lissycasey on Sunday. They should feel confident that if they are in trouble against Ennistymon, they can battle their way out of it.

Both teams are very fit but are prone to inconsistency in attack. Recent match practice may tip the advantage slightly in favour of Lissycasey.