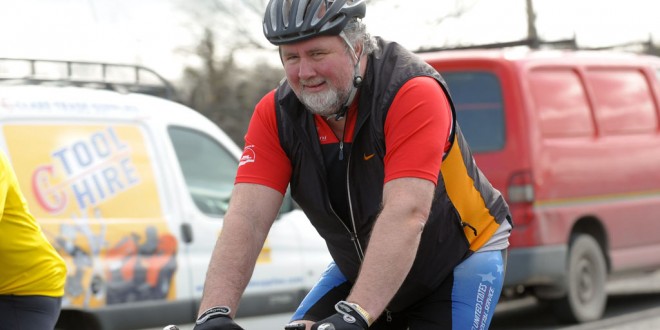 COORACLARE man, Martin Donnelly, who lives in Meath, has revealed details of a fundraising cycle on June 20 and 21.

All proceeds from the two-day cycle, which will start in Clonea and conclude in Cooraclare, will be split between the West Clare Mini Marathon Cancer Fund and St Francis Hospice in Dublin 15.

“This cycle is something that has been in my mind for a while,” Martin Donnelly told The Clare Champion.

“You’re not going to cycle all that way without having a purpose to it. So I came up with the idea of calling it a Cycle In Remembrance. So people will do this in memory of somebody close to them who has passed away and, at the same time, raise much-needed funds for West Clare Cancer Care and St Francis Hospice in Blanchardstown, which is very close to Clonea. There are 60,000 to 80,000 people living in Dublin 15 and they have opened a six-bed hospice. They all need money,” the businessman and former Clare GAA sponsor pointed out.

“What Willie McGrath (mini marathon committee chairman) has been doing here, I’ve been aware of for a number of years. We have to come down the middle of the country using no motorways or no toll roads. Part of our group would have helped to organise the home leg of the Tony Griffin Cycle, when he came into Ennis from Canada. We do a cycle every year for a local charity but we expect to have around 100 cyclists in this and anybody can join on the way,” he said, adding that the cyclists will overnight in Roscrea.

Already a number of high-profile people, including a number of retired Clare footballers, have volunteered.

“I’ve talked to a lot of people about doing it. Bernard Dunne is definitely doing it, as is Tony Griffin. I’ve a few other people lined up, like Mick Galwey, Alan Quinlan, who’ll do a bit of it and ‘Beano’ Rouine has volunteered, as has Noel Normoyle. Gerry Kelly says he has to think about it. The rest of the 1992 team have no other excuse now,” Donnelly said.

He stressed that the cycle is primarily aimed at leisure cyclists.

“It’s not for elite cyclists. We’re going to put people on bikes that haven’t been on one for years. We’ll have regular training and we hope to do pretty well. If we get 100 well-funded cyclists, we’ll do well. All of our back-up people are volunteering. The only thing we have to pay for is the accommodation,” he said.

Martin Donnelly is confident that when the cyclists reach Cooraclare on June 21, they will be well received.

“When you finish, you need a support group. You need people to help organise the finish. It’s West Clare that will benefit from it locally,” he noted.