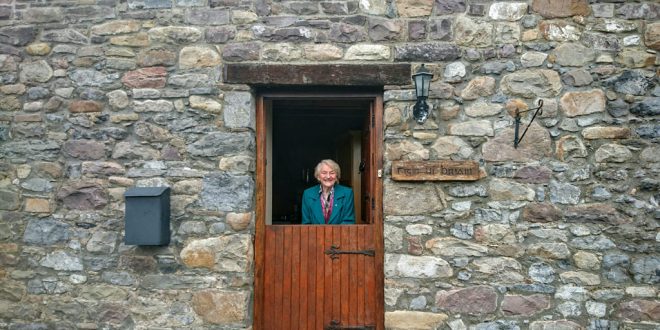 Martina Corry's photograph of her grandmother, Josie O'Brien, at her home in Tulla, has been selected as a finalist in a nationwide photography competition.

Martina puts granny in the frame

AN image captured by Corofin’s Martina Corry of her grandmother has pipped more than a thousand other entries to be selected as a winner in a nationwide competition.

Martina’s photograph of her grandmother, Josie O’Brien, at her Tulla home was chosen as one of 12 winners in the Centra Live Today competition and will now feature in the store’s 2017 calendar.
She will find out later this week if the photograph has taken the top award in the competition, judged by renowned photographer, Barry McCall, as well as Pippa O’Connor.

Martina explained that the photograph was taken when she arrived to pick up her grandmother to take her to her niece’s 80th birthday party. “She was just standing there waiting for me and she just looked so cute I decided to take a photo. It was about three weeks ago and I had it on Instagram.

“I didn’t tell her I’d entered it into the competition until they called me and told me I’d won and she couldn’t stop laughing. Then she was mortified, because she didn’t have her hair done properly in the photo. So I’ve told her that, if I win, we will have a massive girls’ day out, getting our hair and nails done.”

She said her grandmother, who herself will shortly turn 88, is now “loving” the attention that the winning photograph has brought, adding, “She thinks she is famous now.”

The photograph is even more impressive as it wasn’t taken using an expensive camera but a phone. “My mother was always interested in photography so I suppose I got it from her. But I don’t even have a good camera. When I’m picking a phone, I always go for the one with the good camera and this photo turned out really well.”

She has nothing but praise for her model grandmother, saying, “She makes the photo, it wasn’t the photographer.”

Martina continued, “She is very much about living for today, which is what this competition was all about. My granddad died five years ago and, since then, she has had that attitude of living in the moment.”

Members of the public can vote to see who will win the overall competition at https://centra.ie/live-every-day/live-today/vote.