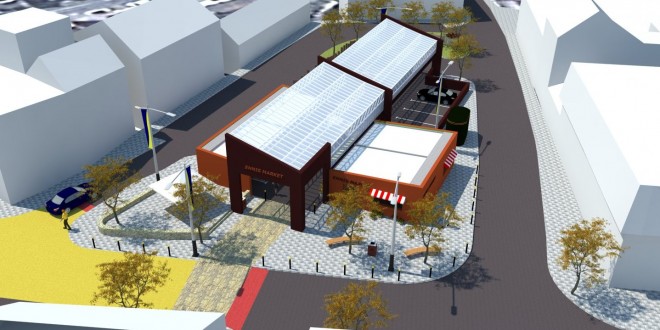 Market revamp could cost over €1 million

PROPOSALS for a revamp of Ennis’ market could cost in excess of €1 million, it has been revealed.
A new design concept for the first phase of a planned redevelopment of the market, beginning at Garraunakilla, has been put on public display, giving people an opportunity to have their say on the development.

The plans involve creating a covered market at Garraunakilla, the current site of the Farmer’s Market, with the first phase part of a wider scheme of improvements to the entire area.

Town manager Ger Dollard said despite next year’s abolition of Ennis Town Council, it is the intention of the council to quickly progress plans.

“Our approach is to try and progress this as quickly as we can and if everything goes well, we could be practically completed by June.”

However, he added, “A big stumbling block is funding, it will cost in excess of €1 million”.

He was speaking at a recent meeting of Ennis Town Council, where it was outlined the plans and particulars of the development had been put on public display under Part 8 of the Planning and Development Act.

Under the proposals, the redevelopment of the market area would  involve forming semi-enclosed spaces, within a structure, on the present car parking area.

The structure would continue to have multi-functional uses, housing at times a car park and, at other times, a market. The structure consists of two adjacent pavilions with a plexi-glass roof covering the central corridor.

The planned redevelopment includes the remodelling and upgrading of the spaces adjacent to the structure and in the surrounding streets, to improve the pedestrian environment with new paving, lighting, drainage, street furniture and trees.

The work would extend from the Market Place junctions with Barrack Street, Lower Drumbiggle Road and Garraunakilla, to include providing a ‘shared surface’ area on Market Place, from its junction with Barrack Street, to its junction at Lower Drumbiggle Road. The development would also involve placing underground all existing overhead lines in the works area.

Submissions or observations with respect to the proposed development may be made in writing up to and including Monday, January 6.

These proposals for the redevelopment of the market were first unveiled in September. Consideration had been given to having umbrella-style covers, however it was instead decided to go with the design that would create a permanent roof for market-goers made of plexi-glass.

The idea received the unanimous backing of members of Ennis Town Council, with the local authority engaging in consultation with businesses and residents.

The proposed design was initally outlined to members of the town council by Eilis Ó Nualláin, executive planner with Clare County Council. She explained, “The idea is to create a more dynamic and economically sustainable market at Garraunakilla, which could act as a catalyst for improvements in the vicinity.

“The concept scheme is based on the importance of forming a suitable landmark to attract people to the area and providing a more pedestrian-friendly sheltered environment in which to shop. Such an environment would also facilitate other interesting  or family-friendly events and activities, which would draw people and footfall. These elements would help to build the critical mass needed to support commercial activity in this important area of Ennis Town Centre.”