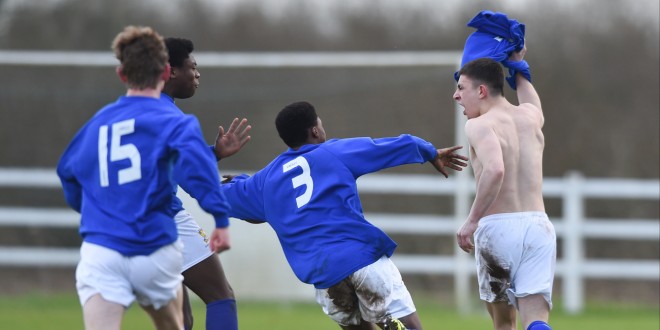 Kieran Mahoney of Clare waves his jersey in celebration with team mates after scoring the winner against Kilkenny during their National Inter-League Youths Cup game in Doora. Photograph by John Kelly.

A goal worthy of any stage with just under five minutes remaining sealed Clare’s passage to the quarter finals of the inter league youths cup at Doora earlier today.

Scorer of a hat trick of goals in Clare’s opening game in the competition, Kieran Mahoney was again the start of the show for the Colm Ryan managed Clare side, scoring twice and having a part in Ethan McNevin’s goal.

Mahoney’s winning goal was an outstanding effort as he blasted to the top corner of the net from outside the area. Taking off his jersey in the celebration which followed the strike led to a second yellow card and his dismissal which will have disappointed all involved.

From an early stage Mahoney troubled the visitor’s defence and he put the home side into the lead after eighteen minutes with a lleft footed strike. This goal separated the sides at half time.

Clare were rocked just four minutes after the resumption when Chris Aylward punished some poor defending and levelled the tie.

The winners went back in front at the mid point of the half when Mahoney caused problems for the Kilkenny defence and his Lifford clubmate Ethan McNevin blasted to the net with the ball taking a deflection on the way.

A minute later the teams were level again as the Clare defence was caught flat footed and the visitors levelled.

Extra time looked likely until Mahoney’s magnificent strike. Kilkenny tried to get back on terms for a third time but this time the Clare defence held firm.