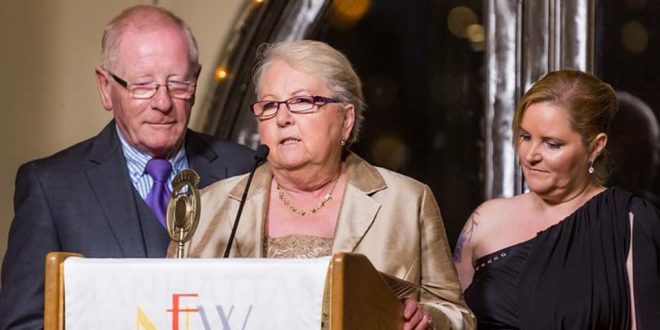 Madge O'Callaghan with her brother, Sean and daughter, Niamh.

Madge O’Callaghan, who spent many years living in Shannon, was a gold winner at the New York Festivals World’s Best Radio Programs 2016.

Madge is not a career broadcaster but her documentary My Uncle Jack, originally made just to record her family history, was picked up by RTÉ and has now been recognised globally.

“These awards are given out to world-class radio programmes, documentaries and dramas in various different categories. It was in New York on June 20. I went over on the Monday and came back on the Wednesday, it was a quick trip. My brother Sean, who lives in Newmarket-on-Fergus, came with me and my daughter, Niamh, who lives in Sixmilebridge came with me as well,” she said this week.

On his achievement, Madge says, “He holds the long distance race walking record for Malin to Mizen, he did it in five days and 22 or 23 hours. Sean (her brother) was his back-up team. He wouldn’t have had access to major supports, so Sean backed him up. Jack has lots of race walking records. He was in the Guinness Book of Records for 1983 for Lands’ End to John O’Groats, so he has that as well as Malin to Mizen. He would have been very well recognised on the continent as a long distance race walker in his day.”

As was the case for many children left without parents in the mid-20th century, Jack was poorly treated by the institutions charged with his care.

“He was sent to an orphanage in Cappoquin in Waterford when his mother died in the 1940s. He was sent from there to Greenmount in Cork, where he was very badly treated, that was one of the industrial schools of the day. He was physically abused while he was there and they wouldn’t allow him to pursue the music or the singing, that was one of the punishments. But he did pursue it as an adult and he teaches music now,” Madge continued.

He will be travelling to Ennis for Fleadh Cheoil na hÉireann later this summer. Madge says one of the highlights of his musical career was once getting the chance to play with Miko Russell in Lisdoonvarna.
The documentary looks at how walking played a role in his dealing with the difficulties in his past.

“It’s about him as a man. People who do walking can be a bit odd, Bram Stoker was a walker and they have a particular mindset. I was looking at how he kind of overcame his beginnings in the industrial school and learned to forgive. The walking was a huge part of that, it was very good for his mental health.”
Madge got her first experience of broadcasting while volunteering for Raidió Corca Baiscinn. She went on to do a documentary training course and then got stuck into My Uncle Jack.

“I absolutely loved it!” she says of the process of making the documentary. “I travelled to Sheffield and interviewed lots of people there. In making a documentary you do about 40 hours of interview to get 40 minutes of radio time. We did a lot of interviewing and a lot of it was not included in the final cut. We spent two days in the studio putting it together. There was a lot of hard work but it was very enjoyable, I loved it and I can’t wait to do the next one. I intend doing quite a few more.”

RTÉ broadcast it as part of their Documentary on One series and it can be heard on the DocOnOne app. Madge says she has been stunned by the reaction to it. “I started off just doing it as a piece of family history. I really didn’t think it would go this far.”

While she is now based in Dublin, Madge maintains a lot of links with the Banner County, where she was based for many years.