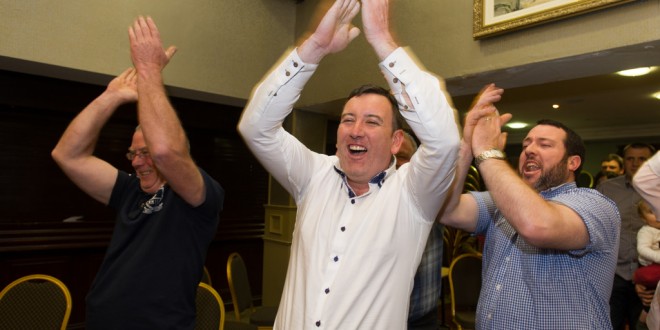 Independent Ian Lynch celebrates his victory with supporters during the election count at The West county Hotel, Ennis. Photograph by John Kelly.

Lynch to stand in general election

INDEPENDENT Kilrush county councillor Ian Lynch has confirmed that he will be a candidate in the upcoming general election, which is expected to be held in late February. Ten candidates have now declared their intention to stand in the Clare constituency.

Elected to Clare County Council in 2014, Councillor Lynch also served on Kilrush Town Council from 2009 to 2014, when he represented Fine Gael. However, he opted to stand as an independent candidate in the county council elections after Fine Gael selected Gabriel Keating, Oliver Garry and Marian McMahon Jones to represent the party in the West Clare Municipal District in May 2014.

Councillor Lynch maintains that the interests of West Clare have not been sufficiently represented in Dáil Éireann and insists that he is the candidate to change that.

“There has been huge support in West Clare for me to run. People have said to me that the West has not had representation, based in West Clare, since 2002,” he said.

Councillor Lynch feels that he has tried to work on behalf of people county-wide, in his role as a county councillor.

“People have acknowledged my efforts in Clare County Council in fighting for the real issues affecting people, including the northern distributor road, the rates hike in Ennis and Kilrush, the ongoing housing crisis and the lack of adequate ambulance cover in our county.”

An employee of Kilmihil-based L&M Keating, Councillor Lynch said his job, family commitments and the costs involved in the campaign ensured that he had to consider the implications of standing in the general election. He has had to apply for a loan to fund his campaign.

“To be honest, the system is not designed for young candidates with a young family and a good career. There is a huge amount at stake and, of course, there is the money required to promote yourself without a big party fund pot. There is no doubt that the cost has been a huge issue, especially after the storm damage we received to our house in February 2014. I have had to self-finance by applying for a loan to fund the campaign. The other consideration was my work. I simply would not be able to put myself forward without the support of my employer,” he acknowledged.

He said he made his decision to stand shortly before Christmas.

“What really spurred me on was two weeks before Christmas, when yet another business closed its doors in Kilrush, Clarecastle was delivered a huge blow with the Roche announcement and an 80-year-old pensioner was forced to wait hours for an ambulance. Even after vigorously and passionately campaigning on the ambulance service in our county, it has fallen on deaf ears.
“No-one has taken action and lives are going to be lost,” he claimed.

He believes Clare did not benefit from the boom and the county is struggling to recover from the global economic crash.

“You have to ask yourself what has been done in the county in recent years? How can a county with one of the deepest water ports in the whole of Europe, offering one of the greatest opportunities of employment, not see one single penny of investment?

“Our international airport has been suppressed to ensure growth of a super airport on the east coast and lack of management of our natural resources has resulted in hundreds of homes damaged as flooding peaks,” he believes.

Councillor Lynch said party TDs have to follow the direction of their whips and, therefore, are not in a position to give their own opinion on issues.

“Consecutive governments have slowly stripped this great county of what we had, including our hospital, our post offices, our gardaí and our schools. Rural Clare is only years away from being non-existent. There are no prospects for our youth and no effort to generate jobs in the areas they are most needed.

“The reality of the political party system is that the voice of party TDs is silenced because they must follow the party whip or they are expelled. We have seen how TDs have turned their backs on the people of Clare when their voices were most needed, as was the case with the closure of Ennis A&E. The people of Clare need a voice that will stand for what we need and not that of the party whip. The political party system has failed our county and our nation. People have turned away from politics, not because they are sick of politics but they are sick of politicians,” he concluded.