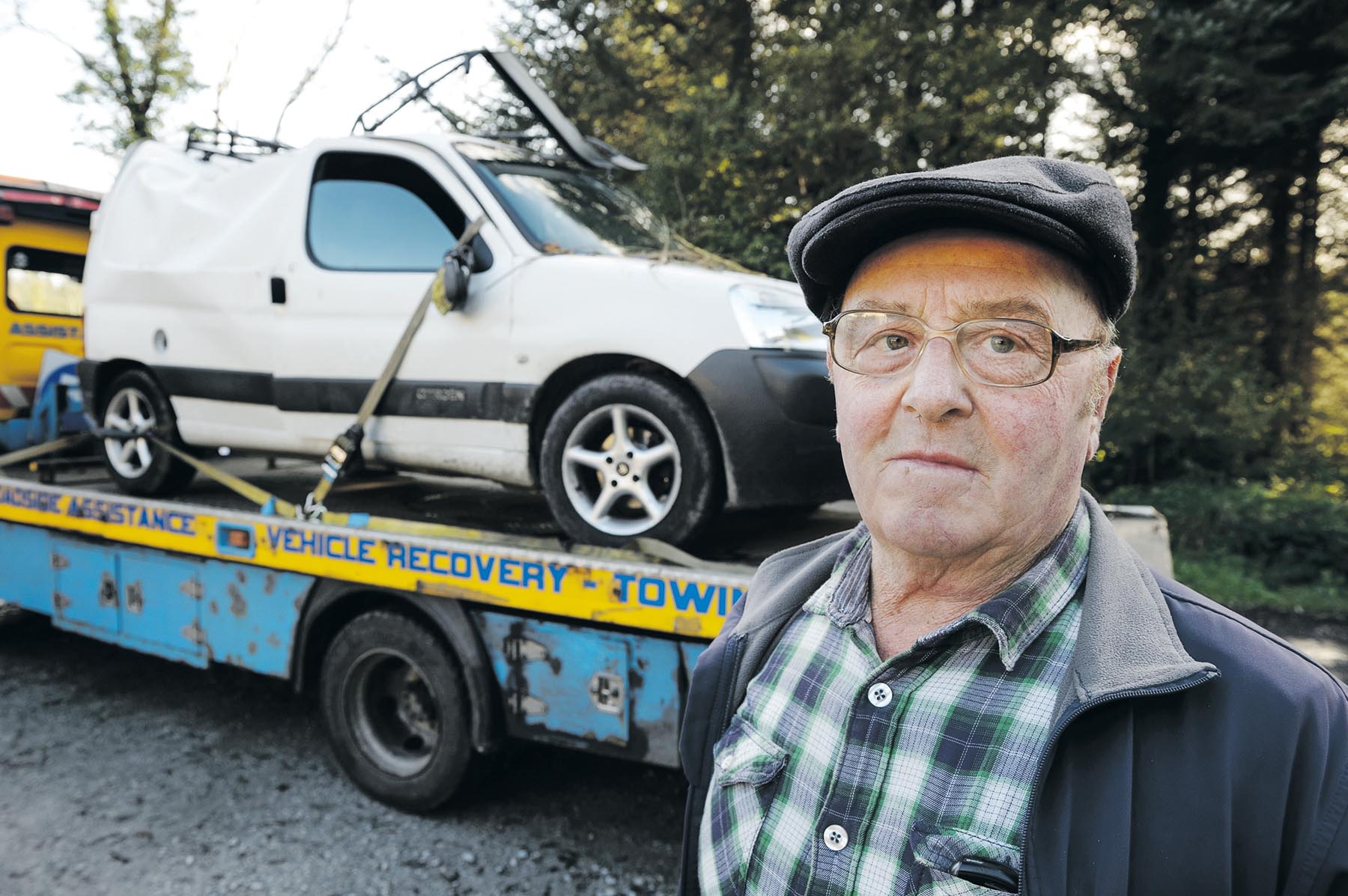 Brendan Hogan had a lucky escape when a tree fell on his van during storm Ophelia near Tulla. Photograph by John Kelly.

lucky to be alive after tree comes crashing down

AN Ennis man has spoken of his horror and how he is “lucky to be alive” after a tree crushed his van just moments after he had got out of it on Monday.

Brendan Hogan (71) described himself as “some kind of Houdini” having cheated death at the height of ex-hurricane Ophelia.

He explained that he left his home in Ennis between 12 and 1pm on Monday to tend to two foals he had grazing in a paddock at Balloughtra in Tulla.

“I went down to see the two foals. I got out of the van and just went around to the back of it, opened the door and took out a bit of ration for them. I was standing at the back of the van and I closed the van door and I heard creaking and cracking. I looked up and I said ‘Oh Jesus’. I had to jump back out of the way, it was that close.

“It came down and destroyed my Berlingo van that I had got a short while ago. It made giblets of it. If I was inside it, the man above would have taken me. It came across the middle of it and across the door. I’d only just got out of it. I’m lucky to be here, when you see what happened those other people,” he noted.

With the benefit of hindsight, Brendan said he should never have gone out in the storm and it was only when he saw the destruction caused elsewhere on Tuesday that he realised the true impact of what had happened.

“When I was coming in by the Maghera way, there was this big beech tree right across the road and there were big limbs coming out of it but my tree was very tall and slender. If there had been big limbs on it, I was a goner,” he said.

Brendan said ex-hurricane Ophelia was different to the effects previous storms have had in the area.

“On this avenue, every so often if a storm is going to knock one, it knocks it to the east, meaning the wind was coming from the west or the south, but this time the trees fell the opposite way to what they normally do,” he said.

Brendan’s van was a write-off. He admitted, “I had a narrow escape. Thankfully there was no one with me at the time. If there was anyone with me in the van, they were a goner”.
He outlined this wasn’t the first time he had a brush with death.

“I must be an unusual kind of a Houdini. I’ve had a couple of narrow escapes,” he noted.
He recalled when he was a teenager, he suffered a serious injury when he and his brother were experimenting with chemicals. This left him hospitalised for eight weeks.

He also had a coronary problem, as he described it, in recent times. “I barely made the regional in Limerick,” he said.

He added that as bad as those were, “none of them was as close” as what happened to him on Monday.

In the moment immediately after the tree came down, Brendan said he was both relieved and disappointed at the same time.

“My van was a write-off and I just had to walk away from it. It could have been way worse, look at that lady in Waterford. I did get a lecture from my family and I don’t blame them,” he nconcluded.

The van was later freed by a local mechanic, who winched the tree off and got the van out.
Later that day, however, another tree came down in the same area.