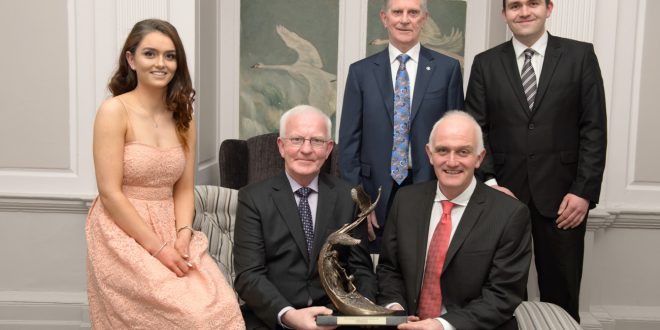 The late Catriona Lucas of Doolin Coastguard is being honoured as Clare person of the Year this evening at The Clare Association annual dinner being held at The Falls hotel in Ennistymon. Her husband Bernard is pictured, at front right, accepting the award form Gerry O Reilly, chairman of the Clare Association with her daughter Emma, son Ben, and Clare Association president Pat Donnell looking on.

THE late Caitríona Lucas was posthumously named Clare person of the year at a ceremony in the Falls Hotel in Ennistymon last night.

Over 300 people were in attendance at the Clare Association function, as the award was accepted by the late Ms Lucas’ husband Bernard, her son Ben and daughter Emma.

Speaking to The Champion at the Falls, Bernard said “It means an awful lot for all of us, for the family, the extended family, it’s a huge honour.”

Bernard, who also volunteers with the coastguard, added, “it’s a very proud night for all of us and it’s a great honour to have. Unfortunately it’s posthumous, but she would be very, very honoured by it.”

He also paid tribute to those who have helped him and his family since last September.
“We’ve had a lot of support from friends and neighbours. It would have been very difficult without them, but we have great neighbours, great friends and great extended family.”
Very shortly after his wife’s death, he was back volunteering his time with the coastguard. “I took about a week off and then I went straight back at it. It’s what the two of us did, it’s what we enjoyed.”
He added “You do take comfort if you are able to help someone else, it means an awful lot.”

Owen Ryan has been a journalist with the Clare Champion since 2007, having previously worked for a number of other regional titles in Limerick, Galway and Cork.
Previous Student village sold for €33m
Next Keenan is king of the ring