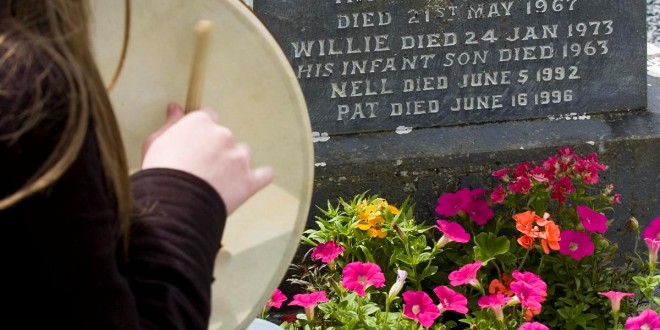 A musician paying her respects at the grave of Willie Clancy.

A HUGE amount of old photographs, postcards, articles from newspapers and other memorabilia is going on display at SuperValu in Miltown Malbay from March 30 to April 6.

Most of the material comes from the late Kathleen Kelly and her son, Cyril and daughter-in law-Patsy now have her archive.

“Cyril’s mother Kathleen used to take an awful lot of photographs so we have all of those and we decided to let the public see them,” said Kathleen.

One magazine article from the 1930s will be on show. “Malachy Hynes was a journalist from Miltown Malbay and he wrote an article for a travel magazine. He wrote about four places and I have a picture of the four of those. It’s laminated and there’s the writing in the middle and the four photographs around it,” said Kathleen.

There is also a programme from the 1945 West Clare Show, at which there were 663 entrants and one from the Clonbony races of the following year.

Cyril said that there is a picture of a group of locals, who were working to help the poor. “It was one way of alleviating poverty, farmers would take their turn of donating maybe an acre of land every year. It’d be tilled and each farmer would put down corn and reap it and bring it to the local mill to be thrashed into flour and distributed then to the poor.”

He said that there are numerous diverse pictures included, from bygone days. “There are street scenes, different kinds of cars, there’s a page of the Champion with the types of cars and tractors, all sorts of things like that.”