Home » Lifestyle » Love still blooming in a time of lock-down 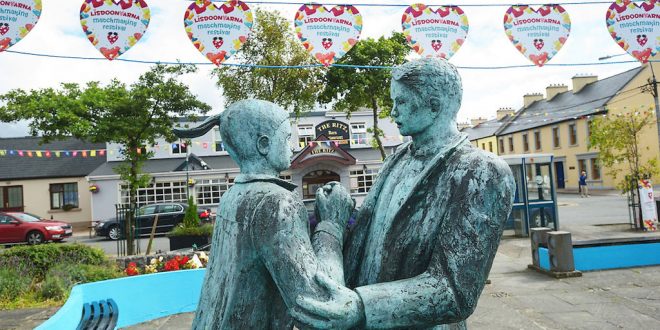 The iconic bronze sculpture in Lisdoonvarna

LOVE in a time of lock-down is still continuing to flourish, with many prospective couples using old-fashioned methods to get acquainted, according to match-maker Willie Daly.

The Lisdoonvarna love guru told The Champion that the extraordinary times we are living through have seen a surge in the number of people putting romance to the top of their post lock-down priority lists.

“Certainly, the restrictions are making life difficult. So many people have lost their jobs and the lack of social opportunities is making people very lonely,” he said. “It’s very hard on people living alone in small apartments at this time. In the last two to three weeks, I’ve had a definite increase in the number of people coming forward to ask for help in finding a partner and there’s a greater urgency too in their calls and letters.”

Mr Daly, who claims credit for around 3,000 marriages over his half-a-century of match-making, said the unprecedented change in people’s lifestyles had also re-focused romantic intentions. “What I am seeing is that men who would have been turned down by women earlier on in the year are now getting a second chance,” he noted. “They’re not Brad Pitts or Leonardo di Caprios, but they’re solid citizens who come from decent backgrounds. Women who might have written them off are now getting back in touch with me to see if they can reconsider and reconnect with them. It reminds me a little of what we saw during the recession, when people were looking for certainty and security.”

The enforced slow-down in peoples’ social lives is another factor that Mr Daly believes is having an impact on the dating and mating game.

“There’s a song that starts off with the words ‘slow down, you move too fast’ and I think all of our lives were moving at a hectic pace. People wanted love right now. That has had to change because of the restrictions. In my experience, men are simple enough beings, they’re always looking to share their love and sometimes they need to have patience. At the moment, it’s a case that you can want all you like, but you have to wait. The result is that people are taking the time to get to know each other. They’re taking the time to talk on the phone and they’re giving each other a chance. I think, in some ways, that women appreciate this and feel they’re on safer ground. They have the opportunity to ask all the questions they want without feeling pressured.”

The art of conversation is also something that, according to Mr Daly, needs a bit of gentle encouragement from a skilled match-maker.

“I do find that I really have to keep encouraging people not to give up on each other on the basis of a phone call or two. There are some fellas like Casanova who have the right chat-up lines, but mightn’t have much to say over the course of more than three phone calls. Then, there are the quiet men, who are slow to start, but they become talkative and they have plenty to say to keep the conversation going. There is no doubt that this situation is testing people and I’m finding I still need to give plenty of encouragement at times.”

With global news media reporting that Covid-19 has contributed to a spike in the divorce rate in China, there is no call for alarm here, Mr Daly believes. “What I think will happen here is that love that might have gone stale will be renewed in many cases,” he said. “That’s because people have been together and looking after each other. Overall, I think love will flourish and grow. For people who were apart, please God it won’t be long until they are back in each others arms. What I do anticipate is a baby boom and that would be a lovely thing to come out of a time of great difficulty. It would be a lovely reward for all of the patience people are having to use at this time.”

Fiona McGarry joined The Clare Champion as a reporter after a four-year stint as producer of Morning Focus on Clare FM. Prior to that she worked for various radio, print and online titles, including Newstalk, Maximum Media and The Tuam Herald. Fiona’s media career began in her native Mayo when she joined Midwest Radio. She is the maker of a number of radio documentaries, funded by the Broadcasting Authority of Ireland (BAI). She has also availed of the Simon Cumbers Media Fund to report on development issues supported by Irish Aid in Haiti. She won a Justice Media Award for a short radio series on the work of Bedford Row Project, which supports prisoners and families in the Mid-West. Fiona also teaches on the Journalism programmes at NUI Galway. If you have a story and would like to get in touch with Fiona you can email her at fmcgarry@clarechampion.ie or telephone 065 6864146.
Previous Key role for Injury Unit in Ennis Hospital
Next Clare Gardaí continue Covid-19 checkpoints