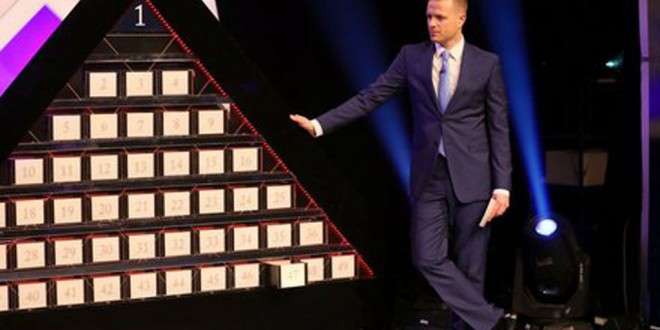 Lotto luck as stuck again for Teresa Cavanagh from Kildysart who won €38,000 on The Million Euro Challenge Game Show on Saturday on RTE at the weekend.

The fourth show of the National Lottery’s latest gameshow, presented by Nicky Byrne, was broadcast last Saturday. Three players from Donegal and Clare won cash prizes to the value of €85,000. Teresa went on to play the Million Euro Challenge game and won a total of €38,000.

This is lucky Teresa’s second appearance on a National Lottery TV game show. She won €71,900 on Winning Streak in 2012.

Now retired, she previously worked in Ei Electronics, a smoke alarm company for 22 years. Teresa enjoys dancing, music and working at her flower beds. She invested her previous winnings in her garden and the grounds of her new house.
National Lotter
She had a feeling on Wednesday night when the Lotto draw was on the television that a win was coming her way. She commented to her niece, “If I have a few more numbers I will have a new car.” Teresa buys a Scratch Card every Sunday morning and always gets three stars.

Top of her plans for her winnings are changing her car, having a meal out with her family and taking a holiday. She would love to go on a dancing holiday. She also has many nieces and nephews to share her winnings with.

Teresa’s sister Jean O’Connell who lives in Ennis joined her on the show as her guest support. She also has a brother and sister in London, PJ and Mary.

The winning ticket was bought from O’Connors’, 19 Market Street, Ennis.