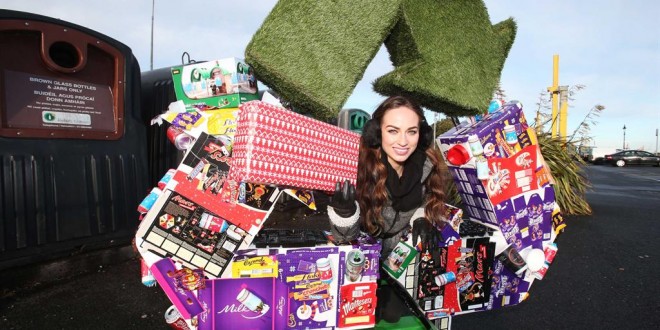 Lots to recycle this Christmas

REPAK is hoping to exceed  its Christmas recycling targets, with the support of both the Irish public
and its members.

Repak estimates that Irish householders will generate approximately 74,000 tonnes of used packaging waste over Christmas (or 44 kilos of waste per household), and receive nearly 12 million Christmas gifts. Its 2,400 members have been hugely supportive of the programme and have helped to facilitate it success as Ireland continues to meet and exceed its targets.
This Christmas, Repak asks the public to continue with its support of packaging recycling during the holiday season. Over the Christmas period, Irish households will consume:

· 60 million litres of alcohol – which would fill over 24 Olympic-size swimming pools.

· Over 28,000 tonnes of cardboard and paper packaging – enough to fill 647 articulated trucks,
which placed end to end would stretch over 6.6 miles.

· 12 million Christmas gifts will be exchanged.

· Recycle more from your screen – Smartphones and tablet go mainstream. TThere are over 1.6
million smartphones in Ireland, and Eircom estimates there will be over 1.2 million tablets by the end of
2013. With 16,000 downloads of the Repak Recyclemore app, savvy consumers can save time and find
the nearest recycling centre to them.

Irish consumers will spend on average €8,994 this Christmas, with an average of €484.81 spent on gifts,
€258.84 spent on food and €150.76 spent on sociocialising. With such an increase in consumption, both
the public and members’ support and participation in packaging recycling is more important than ever.

Bill Collins, Interim CEO, Repak said, “Through the support of our members, stakeholders and the
general public, Repak will again exceed its recovery and recycling targets for 2013. Repak’s members
have invested over €24 million in supportting the recovery/recycling of used packaging in Ireland this
year. This Christmas alone, Repak are looking to recover over 44,000 tonnes of used packaging. This is
significant progress considering that in 2001 we were only recycling 31,000 tonnes of used household
packaging in a full year.

“We would ask the public to keep recycling over the holiday season and to help them dispose of their
excess used recyclables visit Recyclemore.ie or download our Recyclemore smartphone app to find
local recycling facilities, seasonal opening times and alternative bring sites.”