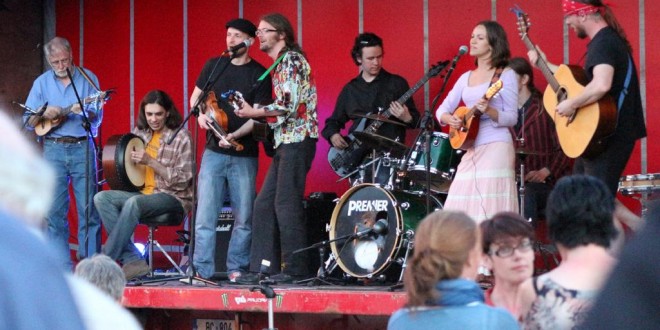 The World Cup may be a fading memory but, for Los Paddys De Las Pampas the need for squad rotation goes.

Although Los Paddys De Las Pampas have their roots firmly in Clare soil, their transnational style has meant a growing number of multicultural artists in their ranks. Mixing cumbias with reels and sambas they have, by now, developed a truly unique and original sound, which is steadily gaining in popularity.

Lead singer, Paddy Mulcahy explained, “The band’s music combines Irish trad with South American folk and rhythm. Our first album, called Come Home, which was released last Christmas, involved 10 musicians from five different countries, who had to be in Ireland for the same two-week period.

“These included a third-generation Argentinean-Irish charango and ronroco player, called Tommy Nelson, and other musicians from around Ireland, Scotland, Australia, South Africa and France.

“Although we sent them the recording material in advance (via email), it remained a very complicated and carefully organised project nonetheless. That said, it was very good fun as well, with lots of room for creative experimentation.

“The album was funded as part of the Gathering Project, organised by the Clare Local Development Company. On this project, I played the Spanish guitar, as it suits the style of the album, and my South American guitar teacher was even in the band,” Paddy said.

Paddy first met lead guitarist, Seán O’Brien, when he was a postgraduate student at the University of Limerick, some years back. Other members include Tessa O’Connor, Adam Shapiro, Angelo Heart, Paddy Egan, Kirsten Allstaff, James Sheppard and Eddy Guilloteau.

The recent addition of dancers marks another dimension to the group’s performances. Now, not only are the sounds being mixed but so, also, are the dance steps, with Flamenco (Sonia Posada) and Irish styles (Lenka Hoffmannova) blending seamlessly.

Seán O’Brien recounted his own reasons for signing-up to the project.

“When I was younger, I decided that music would be my way to freedom, allowing me to live more honestly. Melodies and rhythms have always interested me, ever since I first started to play at only 12 years old.

“Today, as a Los Paddys musician, I have gained vital skills through hours and years of doing what I love best. But being dedicated to becoming a better guitar-player has, also, taught me to recognise the magic in a tune. These days, the change of vibration, when we play and perform, is what inspires me.”

Los Paddys even made the national news recently, when Seán was filmed performing a Slash-like guitar solo on a rocky area of the Ennistymon Cascades, much to the chagrin of the Clare Water Safety Officer.

All’s well that ends well, however, and the group got to use the infamous solo sequence to support their new music video, called The Fall of Man and loosely based on the biblical theme of temptation.

“Our decision to have so many performers was deliberate, as the first album was more of a multicultural project,” said Paddy.

“We are currently writing songs for our second album, which we hope to record next summer. The new songs are a little more streamlined, as we now know what a Los Paddy’s song should sound like.

“Indeed, we have pretty much made up our own kind of musical fusion with an original song, often (but not always) on the theme of South America and its Irish connections.

“However, with a growing number of new members in the band, we have increasingly employed a kind of squad rotation to make it all work. This is because some of our musicians are only available for a few months of the year. The resulting freshness comes from these outside influences constantly coming in and adding new ideas to the mix,” Paddy explained.

For Paddy, Los Paddys is yet another exciting milestone in his own musical journey. Incredibly, his first EP, called Opening Up (2004), was recorded with a band called The Pornographic Left, specialising, he said, in sex, death and obsession.

His next CD was recorded with the group NoLand Folk and was called Never Going Home (2008).

“NoLand Folk finished about two years ago,” lamented Paddy. “Aland Assiri, our Kurdish musician, decided to go home to Iran (Kurdistan) and that event, as well as everyone else having different projects, spelled the end for the group. However, we split up on really good terms and are still great friends.

“NoLand Folk had a very different style to Los Paddys. Mainly, it was more classical in arrangement and very refined. Los Paddys is more wild party music, trad, fun and energetic. Although the level of craftsmanship on the songs is just as high, if not higher, you could be fooled into thinking otherwise, as fun is the name of the game for us.

“People who come to our gigs are very quickly into the dancing aspect. With NoLand Folk, however, audiences were more intent on listening.”

Today, Paddy Mulcahy has a more nuanced role, composing songs, writing lyrics and arranging music for the group. However, there is a high level of co-operation at work, also, with individual band members being free to write their own parts. Indeed, nothing is recorded until everyone is happy with the finished product.

Paddy’s own father is a balled singer, who still regularly plays Irish sessions in Doolin. Paddy himself started off in the business by playing gigs with him at only 15 years of age.

“I always wanted to be a writer but I did not have the patience, earlier in my career, to sit down at a keyboard for long stretches,” stated Paddy.

“Rather, writing songs is something that I accomplished over shorter spaces of time, typically in a few hours or a few days.

“The musical side and the learning of Irish music was certainly all my dad’s influence. He trained me to work in pubs and how to manage different atmospheres. Musicians have different motivations for plying their trade at this game. I did it because I like writing songs and I enjoy the lifestyle but, ultimately, there are a million reasons.”

He added, “The group are very excited to have been announced to headline the closing ceremony of the Even The Olives Were Bleeding concert in Limerick, commemorating all those who served in the Spanish Civil War.

“We, also, have the Clare Harvest Banquet and a long tour of Brittany coming-up next St Patrick’s Day, with plenty more in the pipeline to come.”

Like any World Cup manager, however, Paddy will need a large and enthusiastic squad of players to see him through.

Los Paddys De Las Pampas will perform in Limerick on Sunday, September 14. For more information, see www.limerickcityofculture.ie/content/even-olives-were-bleeding. Information on the band can be found at www.lospaddysdelaspampas.com.

Previous Crusheen’s strong finish too much for Newmarket
Next €150,000 to elect council

The diaries of a fallen soldier

Marta to go cycling and rafting in Uganda for charity