THE plight of the farming community in accessing mobile phone and broadband services in West Clare has been highlighted by a Loop Head man who estimates that his family have paid more than €1,000 over a six-month period when they have virtually no coverage.

John Keane, who lives half way between Cross and Kilbaha, is a dairy farmer, milking over 200 cows a day. He outlined how, since last November, five members of his family have had worsening problems in accessing a phone signal, and said the issue is also affecting the wider community. The situation is now so bad that Mr Keane fears that in the event of him having an accident or a heart attack in his milking parlour, he would be unable to use his phone to raise the alarm.

“I would die in the milking parlour, if, God forbid, I had a heart attack,” he said. “As a farmer, the mobile phone is a safety net. We’re told to carry it at all times, in the interests of farm safety, if we’re working alone. The way things are now, I have to go 100 yards down the road to get a signal, the situation is driving us around the twist.” Mr Keane also outlined that the safety of his 88-year-old mother is a major worry, given the current problem with coverage. “At one stage my mother sent me a message which I didn’t receive for three-quarters of an hour,” he explained. “It’s not good enough that we don’t get the service we’re paying for.”

Mr Keane outlined that three of his family are bill-pay customers, while two have pay-as-you-go phones, all on the Vodafone network. He said that since late last year, coverage had become a worsening issue. “We are getting a discount through the IFA scheme with Vodafone. The bills are coming to around €200 and since last November, we have almost no service for either phone or data. We switched to Vodafone from another network in the belief that its coverage was the best in the country.”

The necessity of good mobile phone and data coverage on a large dairy farm was emphasised by Mr Keane who said it is an integral part of modern agriculture. “Your phone is your best friend nowadays,” he said. “We would expect to be able to do everything from on-line banking, calve registration, recording of medicines and to use the Herd Watch app to keep an eye on livestock. Now, the situation is that you can barely make a call without the signal dropping.”

The family’s frustration with the quality of mobile phone coverage is compounded by their inability to access fibre broadband which has been installed close to their home. “Eir have put down a fibre broadband line, but we can’t access that because they’ve said we’re not on their map.”

In response to a query from The Champion, Vodafone Ireland said it had become aware of a network issue affecting some customers in Loop Head. “Our engineers are currently on-site and working hard to resolve this issue,” a statement from the company said. “We apologise for the inconvenience caused.” The company has also pledged to update customers on progress to resolve the issue.

Fiona McGarry joined The Clare Champion as a reporter after a four-year stint as producer of Morning Focus on Clare FM. Prior to that she worked for various radio, print and online titles, including Newstalk, Maximum Media and The Tuam Herald. Fiona’s media career began in her native Mayo when she joined Midwest Radio. She is the maker of a number of radio documentaries, funded by the Broadcasting Authority of Ireland (BAI). She has also availed of the Simon Cumbers Media Fund to report on development issues supported by Irish Aid in Haiti. She won a Justice Media Award for a short radio series on the work of Bedford Row Project, which supports prisoners and families in the Mid-West. Fiona also teaches on the Journalism programmes at NUI Galway. If you have a story and would like to get in touch with Fiona you can email her at fmcgarry@clarechampion.ie or telephone 065 6864146.
Previous Anger in Tulla after ‘heartless’ graveyard theft
Next Four New Confirmed Cases Of Covid-19 In Clare As National Death Toll Rises by 11 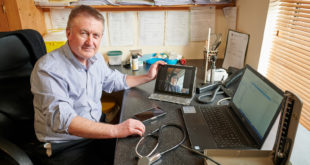