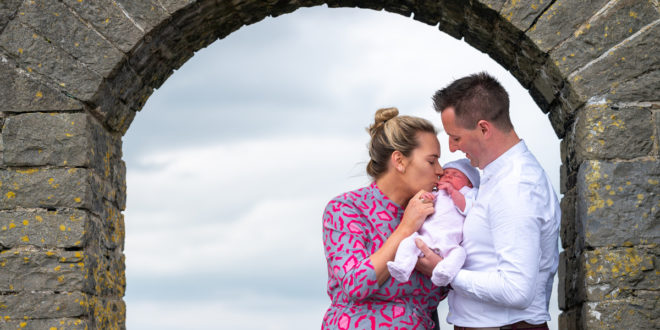 Charlie and Dee Glynn of Kilrush with their baby Ida born on April 11th. Photograph by John Kelly

EVEN as the country continues in lockdown, new babies are arriving into the world every single day and their parents are doing their best in very unusual circumstances.

Kilrush-man Charlie Glynn became a father when his wife Dee gave birth to Ida Mae on April 11. They have a base in Dublin, where their daughter was born, and the slowdown in the economy allowed Charlie the opportunity to spend more time there ahead of Ida’s arrival.

“It’s been a learning curve, the last couple of weeks. Our company, Glynn Technical Diamonds, we were on a bit of a go-slow for the last couple of weeks before Ida was born. It allowed me an opportunity to work from home in Dublin before Ida’s birth, so I suppose you take the good and bad from the Covid-19 scenario. We’re getting there. We’re nearly three weeks into it and we’re getting there. Everybody is safe and well, that’s the main thing.”

Unfortunately, he couldn’t be at Dee’s side for the birth. “Dee had a C Section. I was allowed in for the initial stages of labour but then I had to leave. The first time I met Ida was over FaceTime. When Dee was being moved onto the main wards, there was a little bit of a window of an hour when I was allowed in. Our base up there is only a few kilometres from the Coombe Hospital, so I was able to come over quite quickly.”

While it is the first grandchild to be born on either side, none of the grandparents have had the chance to hold the baby yet. 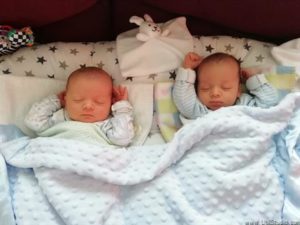 From Loop Head, Philippa Geoghegan had twin boys, Will and Culainn, 11 weeks ago.

She already had two children, a 15-year-old son and a three-year-old daughter, and while having twins is much more challenging anyway, the lockdown made things even harder. “It’s been a lot more difficult. When you have a newborn baby, you get loads of visitors. Everyone wants to come and see the baby and give the baby a cuddle. That was kind of robbed from us. The first three weeks we had very few visitors but people kind of stay away until the six-week mark and they’re a bit stronger. By then, it was total lockdown. I didn’t get any visitors and you’d be kind of looking forward to it, through the haze of night feeds. It keeps you going, the visitors and the bit of company but we didn’t have any of that.”

Her husband’s parents live in Limerick and haven’t been able to see the two new grandchildren since lockdown got underway. Philippa’s parents live nearby but can only see the boys from a distance.

The public health nurse had to stop making regular visits to them, while the boys had to get their vaccinations while in the car outside their GP’s practice.

Strange times indeed but Philippa is thankful that her pregnancy went well and that the twins arrived safely. “It was a fairly normal pregnancy, I got gestational diabetes, which is common enough when you’re expecting twins. Other than that, it was fine. It was a natural birth in Limerick and it went well. “The second one was a bit hairy coming out. They told us that at the start. The first one is the easiest to deliver, then the second one, because there is so much room in the womb, it can get a little bit lost and forget to head to the birth canal. There were hands on my bump trying to guide him in the right direction.”

Living so far from the maternity hospital was a concern leading up to the birth. “It definitely was a worry. It always is. I have one neighbour who had her baby on the side of the road at Darragh.”

Will is 43 minutes older than his brother but was a pound lighter and Philippa says there has been a big difference in the two babies’ temperaments.

“They’re like chalk and cheese. One has colic, is very unsettled and cries a lot. The other one is real placid and is smiling and laughing.”

From Shannon originally, Margaret Curtin is currently living in Kilkishen and recently had her first child, Freddie.

Herself and her husband were living in the north of Italy until late last year but came home to give the baby an Irish birth. “We spent most of my pregnancy in Italy. We were over there for work and we got home just in time before all of this pandemic stuff hit.

“We only got home from Italy on December 16 and we came home specifically to have Freddie because we wanted him to be born at home. “We had him then. We weren’t long out of hospital when all of this happened. Very few people have met him and that kind of upset me a little bit, that he hasn’t met an awful lot of people and he’s getting so big already.”

Again, the other family members haven’t had much chance to see the new arrival. “My husband’s Mam and Dad met him once, but only briefly. His mother met him in the hospital briefly after he was born but then she was taken into hospital herself. She hasn’t seen him since. His father called to the house once but that was it.

“My mother lives in the UK. She came over from the UK just before the lockdown and she got to see him but then we were locked down. My Dad lives in Belfast, so him and his wife and the family in Belfast, none of them have met him. It’s a bit sad in that sense. My sister in Shannon has always been so good to us and my brother in Shannon has hardly seen him.”

However, she is very glad that they came back to this country before the pandemic started to make its presence felt in Italy. “We got home and we’re safe and we don’t have to endure the things that our Italian friends have to. It’s bad enough here but their lockdown is way worse.”

Laura Ryan and her husband Stephen welcomed their daughter Nina on April 9.

While Stephen was there on the day of the birth, he had to leave shortly afterwards and couldn’t see his wife and daughter again until six days later, when he brought them home. “I was able to manage fine but it was awful for him. Six days is a long time,” Laura said.

Not having other visitors after having a C Section and while she was breasfeeding may have been a blessing in a deep disguise. “The fact there were no other visitors was really good because I was breastfeeding her and she was over in the neonatal unit and I was expressing as well.

“I was going over to her, feeding her, going back to my room, expressing, trying to eat or sleep or shower, and there were midwives coming in doing check-ups or giving medication. That was being done on a three-hour routine.

“I’d have loved to see my parents or Stephen’s Mum but it was actually better for me to not have that. It forced me to recover a little bit better but I’d have much rather Stephen be able to come in. You nearly feel guilty, even though it wasn’t my doing.”

Again, there are grandparents who haven’t been able to get close to the new baby. “My parents just live out the Kilrush Road. They’re both in their 70s, so they’re cocooning and we’re doing the shopping. Because I had a C-section, I can’t drive, so Stephen is the one who does the shopping.

“We have called out to the house in the car and they’ve seen her but they haven’t held her or touched her and Stephen’s Mum would be the same,” Laura concluded.

Owen Ryan has been a journalist with the Clare Champion since 2007, having previously worked for a number of other regional titles in Limerick, Galway and Cork.
Previous midwives go extra mile during pandemic
Next Carrigaholt hold ‘virtual’ Oyster and Trad Festival