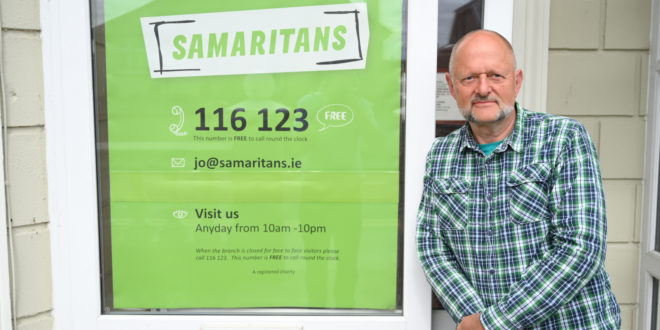 EVERY day people go into the Samaritans centre on the Kilrush Road in Ennis and take calls from people in different levels of distress, some of them at risk of suicide.

When Covid-19 struck, it placed at least some stress on everyone, while it was particularly difficult for some people to cope, and problems of loneliness and isolation were made more acute than before.

It made the service the Samaritans are offering even more valuable than it had been but it posed some new challenges for the organisation, which director Gerhard Terpelle feels have been quite well handled. “I think we are doing fairly well. Of course we are affected by the virus a little bit, like everybody else. Some volunteers had to stay at home when the first phase started; they were over 70 and things like that.

“The other volunteers were very generous with their time. Some did two or three and even four duties a week. That was fantastic; we were very grateful for that.” The phones have been ringing a bit more often over the last few months, predictably.

“The volume has changed, it has risen. Covid-19 is a big factor, it comes up in many calls. People who were lonely are even more lonely now because they can’t go out, they can’t meet anybody. I would say our service has been very valuable in this time; it’s even more needed than it was before.”

A greater logistical effort has been needed to protect the health of the branch’s volunteers and to do everything required to prevent any risk of infection. “We have to be careful with our volunteers. We are very lucky compared to other branches because we have separate rooms where you can take calls; we are actually the only branch that has this situation. Other branches have cubicles that are beside each other and things like that.

“As soon as we come in, we sanitise our hands and we sanitise the desk before we start working. Before we leave, we do the same. That’s all going on and it’s a big strain on our financial situation as well; the amount of money we spend on sanitisers and wipes and stuff like that, with no money coming in, or almost no money because we can’t do any fundraisers outside.

“We started organising virtual fundraisers via Facebook, Instagram and Twitter, stuff like that but it’s not as effective at the moment at least, compared to a church gate or a street collection because people don’t see us.”

People can support their Samaritans branch via the online iDonate channel or by sending a cheque to Samaritans, Kilrush Road, Ennis. The Samaritans can be contacted for free by calling 116123 or sending an email to jo@samaritans.org.

Meanwhile, a fundraising cycle in aid of Samaritans Ennis and Clare last weekend raised over €1,700, with donations still coming in.

On Friday of last week, Ennis man Peadar White took on a 12-hour cycling challenge from his home. He has been “delighted” with the response to the fundraising effort. “It was a great day. I had hoped to reach €1,500 but we’ve already gone over that and more is coming in. It’s great to see so many people supporting the work of Samaritans here in Clare.” Donations can be still be made online at www.idonate.ie/PeadarWhite12HourCycle or by sending a cheque to Ennis Samaritans, Sunville, Kilrush Road, Ennis.