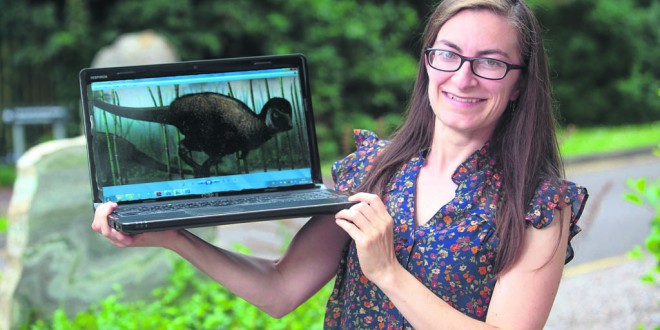 A PALAEONTOLOGIST who lived and worked in North Clare is among a team of scientists whose research, published this week, suggests that all dinosaurs had feathers.

The evidence presented by Dr Maria McNamara and her colleagues changes the previously-accepted hypothesis that only one group of dinosaurs had feathers.

Dr McNamara is a palaeontologist in the School of Biological, Earth and Environmental Sciences at University College Cork. From Clonmel, she previously lived in Moymore and was employed as a geologist in the Burren Geopark, where she worked with about 20 primary schools, the Cliffs of Moher Visitor Centre and the Burren Outdoor Education Centre.

Dr McNamara was approached over a year ago, while working in the University of Bristol, with dinosaur fossil specimens from a site in Siberia. She has been key to discovering the first-ever example of a primitive plant-eating dinosaur with feathers and scales. Previously, only advanced flesh-eating dinosaurs were known to have had feathers, so this new find indicates that all dinosaurs could have been feathered.

The new dinosaur, named Kulindadromeus Zabaikalicus, comes from the Kulinda fossil site in eastern Siberia and is described in a paper in the international academic journal, Science. Kulindadromeus shows scales on its tail and shins and short bristles on its head and back. The most astonishing discovery, however, is that it also has complex, compound feathers on its arms and legs.

Lead author, Dr Pascal Godefroit, from the Royal Belgian Institute of Natural History in Brussels, said, “I was really amazed when I saw this. We knew that some of the plant-eating ornithischian dinosaurs had simple bristles and we couldn’t be sure whether these were the same kinds of structures as bird and theropod feathers. Our new find clinches it: all dinosaurs had feathers, or at least the potential to sprout feathers.”

The feathers were studied by Dr McNamara, along with colleagues in the UK and France, who specialise in the development of feathers and scales in modern reptiles and birds.

Dr McNamara said, “These feathers are really very well preserved. We can see each filament and how they are joined together at the base, making a compound structure of six or seven filaments, each up to 15mm long.”
Dr McNamara’s research focuses on how delicate, soft tissues such as feathers and skin are preserved in fossils.
“I have always been interested in how soft tissue gets preserved in fossils. Most fossils are shells, bones and teeth but, every so often, you get other softer tissues. Normally, they rot away but when they don’t, they tell you a lot about anatomy and physiology and even behaviour. I have always been interested in how these are preserved and I have done a bit of research on that previously so, for this particular paper, when our Belgian and Russian colleagues realised that what they might have found in the fossils could possibly be feathers, they invited me to join the study,” she explained.

After Dr Godefroit approached Dr McNamara, she began to study the fossils. “I looked at them, I studied them under the light microscope and the electro microscope. I did some preliminary analysis on them and tried to explain what they were and tried to link them to feathers in modern birds,” she said.

The team then spent six to eight months discussing the findings, before the paper went to peer review and was published.

“It was very exciting. We almost didn’t believe it at first. You manage to convince yourself, then you have to convince the wider community,” Dr McNamara outlined.

The discovery suggests that feather-like structures were likely widespread in dinosaurs, possibly even in the earliest members of the group. Feathers probably arose during the Triassic, more than 220 million years ago, for insulation and signalling and were only later used for flight.

“Up until now, it seemed that feathers evolved very late in the history of dinosaurs, in a very advanced group of dinosaurs that included the direct ancestors of modern birds. Now, with the discovery of complex feathers in a very primitive dinosaur, we can say feathers must have evolved very early in the dinosaur history,” Dr McNamara told The Clare Champion.

Smaller dinosaurs were probably covered in feathers, mostly with colourful patterns and feathers may have been lost, as dinosaurs grew up and became larger.

The Kulinda site was found in the summer 2010 by Sofia Sinitsa and her team from the Institute of Natural Resources, Ecology and Cryology SB RAS in Chita, Russia. Over several summer digs, the Russian-Belgian team excavated many dinosaur fossils, as well as plant and insect fossils.

Expert in feather development in chick embryos, Professor Danielle Dhouailly said, “Developmental experiments in modern chickens suggest that avian scales are aborted feathers, an idea that explains why birds have scaly legs. The astonishing discovery is that the molecular mechanisms needed for this switch might have been so clearly related to the appearance of the first feathers in the earliest dinosaurs.”

Kulindadromeus was a small plant-eater, only about 1m long. It had long hind legs and short arms, with five strong fingers. Its snout was short and its teeth show clear adaptations to plant eating. In evolutionary terms, it sits low in the evolutionary tree of ornithischian dinosaurs. There are six skulls and several hundred partial skeletons of this new dinosaur at the Kulinda locality.

According to Dr McNamara the response to the paper from colleagues has been widely positive but there will “always be people who are not fully convinced and that is fair enough because, as a scientist, you want to see the evidence yourself”.

“What we are doing is putting forward a hypothesis and a hypothesis can be tested and it is a case of looking for more specimens of the same age and even older. Now we know if we want to look at the very first steps as to how feathers evolve, we need to look before the middle Jurassic period. We need to look back at the early Jurassic or maybe even the late Triassic. This shows us where and when we need to be looking,” she concluded.

Previous Spire repaired at Church of Ireland in Spanish Point
Next Property market on the up in East Clare? 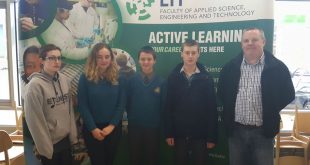 Back to RDS for science entrepreneurs