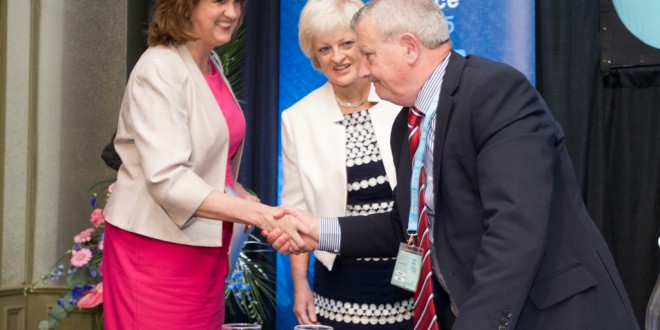 THE Irish Congress of Trade Unions president has urged Clare County Council to declare the county a “Living Wage County”.

John Douglas was speaking at a civic reception hosted by the local authority for ICTU on Tuesday night.

Congress has repeatedly called for the implementation of a Living Wage of €11.50 per hour in the Republic of Ireland. This would bean increase of nearly 33% on the minimum wage for an experienced adult worker, currently set at €8.65.

The Living Wage is a wage that makes possible a minimum standard of living. Mr Douglas made the call at the reception following a comment by former Mayor of Ennis, Councillor Johnny Flynn.

“If I could get support from a number of my colleagues, we would put down a proposal at next week’s Clare County Council meeting to discuss seeking Government support for the Living Wage,” the Fine Gael councillor stated.

Councillor Flynn said while the matter is not currently on the agenda, there is precedent to put a written proposal to the meeting for consideration. He is eager to raise the issue at the July meeting because there is no August meeting.

“Our next meeting is not until September and, at that stage, a lot of the formulation of Budget 2016 would be completed.

“The Government is currently framing policies for the Budget, so it would be great if the county council would support the ICTU proposal for a Living Wage of €11.50.

“It will take a number of years to bring it to that level but I would like to see if we could start
looking at the recovery being a wage-led recovery,” Councillor Flynn said.

“Personally, I would like to see the Government incentivising employers to achieve that. The increased tax take at national level should be funnelled back to employers to support that Living Wage,” he added.

While the councillor said he would like to see the county becoming a leader in the Living Wage campaign, he added that each company would have to consider their own situation and the change would have to be introduced over a number of years.

“As a director of a company that employs people, I would say that if the Government assists employers in achieving that [the
provision of the Living Wage], it would be of huge benefit to our own business’ ability to be able to do that,” he said.

“Certainly it would be fantastic if Clare led this but there are no financial supports in place for employers to create employment and support it. There were some but a lot of these have been stripped away. There needs to be an incentive.

So Clare County Council could incentivise it through rates and water charges and it is about everyone playing their part in making this realistic and achievable. Everyone needs to come together on this and it is an important development for the recovery of the county and country,” Councillor Flynn continued.

At the reception, Mr Douglas said Clare could lead the way in promoting the concept of a Living Wage, the concept of decent work and the right to respect and equality at work.

As a Wicklow man, Mr Douglas described Clare as his second-favorite county.
As a regular visitor and supporter of Clare hurling, “since it’s not a strength in my own county”, Mr Douglas said, he has a special affection for Clare and the people of the Banner County.

Designating the county as a ‘Living Wage County’ would be consistent with
the values of the people of Clare, he concluded.

Ennis flood protection in danger without works to historic structure