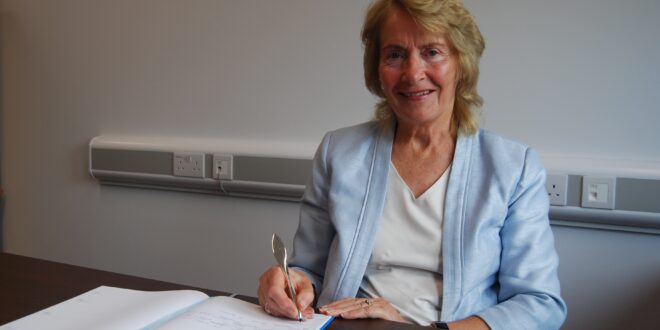 CBS Primary said goodbye at the beginning of this month to its longest serving member of staff Mary Murphy, described as “a living legend” by those at the Ennis school.
Mary spent 42 years in CBS, never having taught or substituted in any other school. She was a teacher, but also a parent, having sent her children to the school also.
Graduating from Mary Immaculate College in 1978, she was immediately snapped up by the CBS. She taught every class from senior infants to fourth class, Special Education Teaching and also EAL (English as an Additional Language).
According to school principal Dara Glynn in excess of 1,000 students over the years have benefited directly from her “outstanding teaching abilities”.
During her time, she worked her way through the ranks of the school including holding the position of deputy principal and indeed principal.
Mr Glynn outlined that Mary “excelled at all of those positions, hitting high standards and always leading by example”. Accordingly, she had the love and respect of all the students, staff and parents. “She’s the physical embodiment of everything that is good about our school” said one parent.
Not surprisingly, her high standards had an influence on her own family too, with so many of her children training as medical doctors and one training as a teacher.
Not limiting herself to teaching alone, Mary took the pastoral care element of her role very seriously. She was central to the school’s healthcare provision, holds a graduate diploma from NUIG in Health Education and is a trained mentor for newly qualified teachers. “She has always put people first, inspiring others to do the same,” added Mr Glynn.
Mary always moved with the times and was a strong believer in upskilling. Demonstrating this belief by example, she became the school’s resident expert in the uses of Aladdin, its online information and management platform.
Mr Glynn described her as “the best Deputy Principal he has ever known and utterly irreplaceable. She will be truly missed but has earned the right to a long and wonderful retirement. Congratulations Mary.”