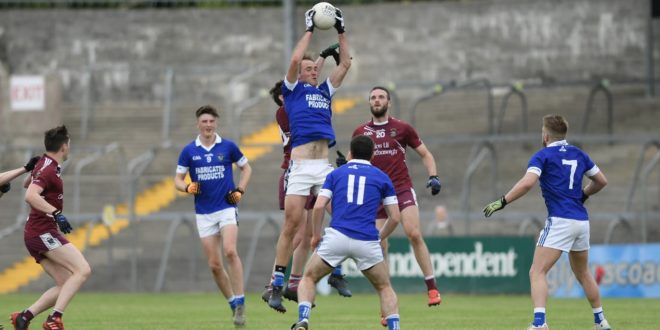 Penalties looked on the cards in this contest but it a penalty that ultimately decided the game as Lissycasey edged through a tight contest.

The decisive score arrived in the second period of extra-time as Conor Finnucane converted a penalty that was all of Cratloe’s own making.

Cratloe struggled without regular top scorer Cathal McInerney as an outlet while Sean Collins was also absent through suspension. Lissycasey’s organisation and discipline in defence was key along with a high level of work-rate.

Lissycasey held a narrow lead at the break but it could have been a much different story only for a brilliant save from Killian Normoyle. He got down low to turn away a flicked effort by Conal O’Hanlon after Conor McGrath’s ball across the square. The follow up was missed by the onrushing Killian Phair, and it was compounded moments  later as Normoyle fired over a long range free to bring the sides level for the second time in the contest.

Cratloe were first out of the blocks as Rian Considine, Podge Collins and Phair all landed scores to give them the perfect start. New recruit Billy Sheehan was showing prominently while David Collins man marking job on Conor Finnucane was cutting down on the Lissycasey threat.

It was another of their danger men who led the fightback with two great scores from the lively Aaron Griffin along with a fine score from distance by Mikey O’Neill to restore parity after 13 minutes. Podge Collins sent over a classy score to give the two time champions a one point lead at the water break.

The second quarter of the contest saw Lissycasey turn the scoreboard around with Normoyle’s two scores from distance being the difference at the break. A disciplined and organised defence cut down on the space that the likes of Podge Collins and Rian Considine had to work in while the long ball option to O’Hanlon and Phair was not getting through. Collins also had a good goal chance in the closing stages of the half but his angled shot flashed across the goal. Both sides were wasteful in front of goal in the opening period, with poor wides and shot selection a common theme.

The second half started on a sour note for Lissycasey when Cian Meaney saw red for an off the ball incident, and it came just after Liam Markham had levelled the contest. The perfect response came when Normoyle fired over another free, with Finnucane doing likewise in between scores from Collins and Markham to see the sides level for the fifth time in the contest. Substitute Jack McInerney edged Cratloe back in front by the minimum as the final water break was called.

A crucial score arrived straight after as Aaron Griffin profited from great work by Enda Finnucane to palm to the net from close range. It left Lissycasey 1-7 to 0-8 in front with less than minutes to go. The reply was immediate as Podge Collins notched his fourth, but it could have been much worse only for another fine save by Normoyle to deny O’Hanlon once more.

Griffin was lively throughout and testing the composition of the Cusack Park woodwork with a rasping shot that belted the crossbar. Cratloe broke downfield and the sides were level for the sixth time as Liam Markham slotted his third point.

Lissycasey were reduced to 13 men for the closing stages as Francie Hayes was sent to the sinbin, with six minutes of additional time called by referee Niall Quinn. No winning score emerged and extra-time was called.

They were still deadlocked after the opening period of extra time with Damian Browne opening the scoring while Finnucane and Griffin put Lissycasey in front. New recruit for Cratloe Billy Sheehan kicked a fine score from distance to see the sides level for the eighth time as heavy rain began to fall.

Both teams were tiring but Lissycasey profited from a poor Cratloe kickout as Mikey O’Neill was fouled in the square. Conor Finnucane stepped up and slotted low to the net to put real daylight between the sides as Lissycasey led 2-9 to 0-12.

Podge Collins cut the gap with a free but there was to be no late twist as Lissycasey held on to move into the winners round and one game away from the semi-finals.