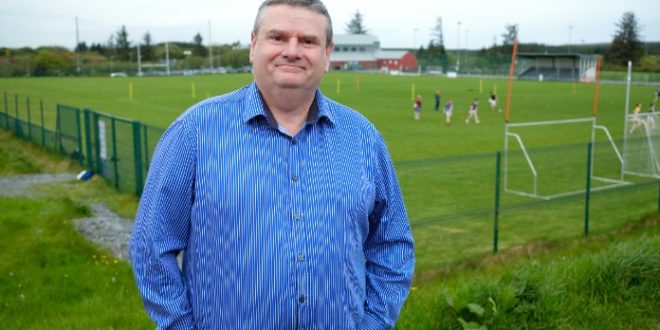 HUGE community efforts have been credited for the reopening last Friday of the playground in Lisdoonvarna. The venue, which is popular with kids and their extended families, has been described as one of the jewels in the crown of the facilities available for the town and a network of other centres in North Clare.

The playground, which is next to the popular Cois Céim Childcare Centre, and part of a wider community amenity park, was closed as part of the nationwide response to the pandemic. An inspection discovered that in order to continue to meet standards set out by insurers, a significant – and costly – schedule of repairs was needed.

“Fundraising during Covid-19 was difficult for everyone involved and they deserve huge credit, as do those who contributed so generously,” said Councillor Joe Garrihy, Cathaoirleach of the West Clare Municipal District and a board member of the community development association, Lisdoonvarna Fáilte. “Friday’s event was actually the first official ceremony for the playground, because it never had one which it first opened around 12 years ago. Our local hero Niamh O’Dea was there to officiate and we had Councillor Joe Killeen too, which was fitting, given that his cousin Deputy Tony Killeen, who was a minister at the time, turned the sod on the project in 2006. We had a lovely socially distanced gathering and it’s great to have a good news story for the community when things are tough, in general, at this time.”

The playground originally cost €230,000 to build and was part of the overall development of the amenity park which opened in 2008. Fundraising for the maintenance and repair works was done through a Go Fund Me account, with a number of generous donations. “We’re so grateful to everyone who gave what they could,” said Councillor Garrihy. “Megan White of the White Hotel Group gave us a significant donation, which made a real difference.”

Councillor Garrihy paid tribute to Siobhán Brennan of Cois Céim and her dedicated staff of 14 who now have the playground back in use. “It’s particularly important in the context of the coronavirus, that the children now have this outdoor amenity back and that they can go along in their pods and enjoy themselves,” he said.  The Fine Gael members also thanked Marie Urquhart, Chairperson of Lisdoonvarna Fáilte. “She and the board and the wider community have done amazing work,” he noted. “I was chairperson back in 2005 when we were working to draw down €4 to €5 million over the period from 2006 to 2010 to develop community amenities.”

The area was derelict up to 2006, Councillor Killeen also noted, and 14 years later boasts a range of facilities from astro-turf to the Lisdoonvarna Pavilion Theatre. Despite the challenges posed by the pandemic Lisdoonvarna Fáilte is steaming ahead with further developments in the short and longer term.

“Lisdoonvarna Fáilte must be one of the largest community development organisations in the country” noted Councillor Garrihy. “There’s 80 acres of community-owned land and several large amenities. It has a lot going on and we’re looking to the future.”

Carpark bingo takes place next Sunday to provide social interaction and a welcome distraction in the midst of the pandemic with the organisation also looking ahead to the regeneration of a heritage trail around the amenity park and even a community-owned solar wind farm.

“In terms of the park, there’s a lot of potential,” Councillor Garrihy said. “We’re thinking of a biodiversity trail with water and heritage features to underline the history of the Spa Wells. It’s a way of linking in with the wellness identity of the town.”

Fiona McGarry joined The Clare Champion as a reporter after a four-year stint as producer of Morning Focus on Clare FM. Prior to that she worked for various radio, print and online titles, including Newstalk, Maximum Media and The Tuam Herald. Fiona’s media career began in her native Mayo when she joined Midwest Radio. She is the maker of a number of radio documentaries, funded by the Broadcasting Authority of Ireland (BAI). She has also availed of the Simon Cumbers Media Fund to report on development issues supported by Irish Aid in Haiti. She won a Justice Media Award for a short radio series on the work of Bedford Row Project, which supports prisoners and families in the Mid-West. Fiona also teaches on the Journalism programmes at NUI Galway. If you have a story and would like to get in touch with Fiona you can email her at fmcgarry@clarechampion.ie or telephone 065 6864146.
Previous Community Group Seeks Traffic Calming For O’Brien’s Bridge Crossroads
Next Clare woman on top Down Under