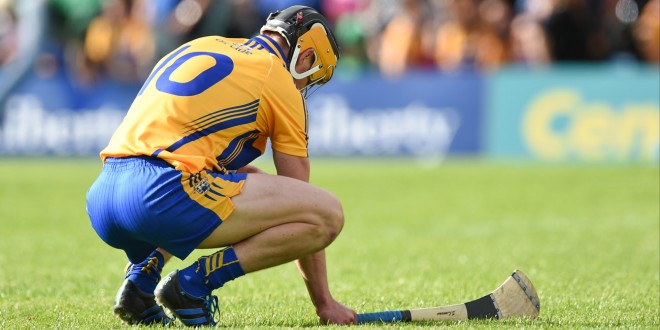 A disappointed John Conlon of Clare following the loss to Limerick in their senior championship meeting at Thurles. Photograph by John Kelly.

It was said on many occasions in the lead up to this game that it would be close and that it would produce many talking points,. It certainly did. In modern times Limerick and Clare have never failed to provide plenty of entertainment when they have clashed on the hurling field and particularly when those meetings are at championship time.

The latest clash ended in a one point loss for Clare. That they had chances to have at least earned a draw is without question but, in the end, time ran out and Limerick emerged with a one point victory and a semi-final date with Tipperary in mid June.

It was fast and furious from the outset and Limerick and Limerick had t wo points on the board before Colin Ryan opened Clare’s account in the sixth minute. They were level at 0-3 each by the tenth minute but three points in two minutes saw Limerick go 0-6 to 0-3 in front. Clare fought back again and they were just a point adrift when the half time whistle sounded with the score at 0-8 to 0-7.

One of many talking points came on the stroke of half time when joint team captain Pat Donnellan was shown a straight red card following a clash with Limerick captain Donal O’Grady.

Fifteen minutes from the end Limerick were reduced to fourteen when substitute Seanie Tobin saw red after he ran on to the pitch and clashed with Clare defender Pat O’Connor.

Within two minutes of the restart Clare were level thanks to points from John Conlon and colin Ryan. By the fifth minute of the half, Clare were in front for the first time after Conlon sent over a superb score from near the corner flag.

Limerick came storming back and when Graeme Mulcahy fired home their goal after the Clare defence had failed to deal with a high delivery, the Shannonsiders were six points clear, 1-16 to 0-13.

Limerick fans were still cheering Mulcahy’s goal when Clare substitute Aaron Cunningham weaved his way past a few defenders to fire home Clare’s first goal. Tony Kelly followed with a superb poinht and when Cunningham struck for another goal, six minutes from time, the minimum separated the teams.

A minute later Munster officials were looking at a replay next weekend when Shane O’Donnell pointed but it wasn’t to be and Limerick substitute John Fitzgibbon hit what proved to be the winning point with two minutes of normal time still to play.

Clare’s intermediate hurlers also failed to Limerick at Thurles this Sunday afternoon when they lost by two points, 2-15 to 3-14 in the opening game on the programme