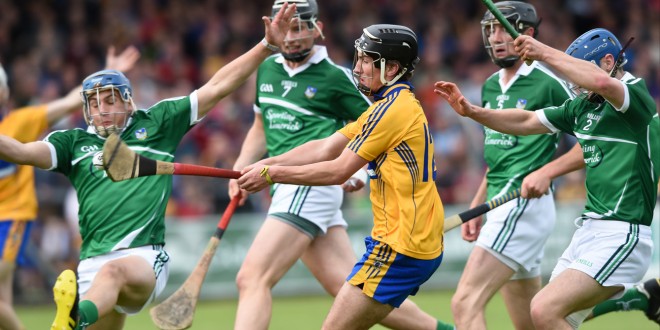 Ian Galvin of Clare is tackled by four Limerick players during their U-21 Munster final against Limerick in Cusack Park. Photograph by John Kelly.

A contribution of 0-13 from Ronan Lynch paved the way for Limerick’s merited three point win over title holders, Clare in the Munster under 21 hurling championship final, played before an attendance of 14,311 at Cusack Park onThursday evening.

There were periods in the first half when Clare looked like they might make history and win the title for the fourth year in a row, but the visitors had the better of the second half exchanges and deservingly won a place in the All-Ireland semi-final against Galway on August 22.

Both teams had their periods of dominance in the opening half, at the end of which Clare held a two point advantage, 0-12 to 0-10. The Shannonsiders registered the first two scores but four in a row for the home side had them 0-4 to 0-2 in front after just seven minutes.

Limerick had the better of matters for the next 15 minutes, hitting six points without reply to lead by double scores, 0-8 to 0-4, with seven minutes remaining in the half. From here to half time, Clare played their best hurling of the evening, hitting five points in four minutes through Eoin Quirke, Bobby Duggan (2) David Conroy and Ian Galvin.

The title holders started the second half where they had left off in the first and hit the first two scores through Ian Galvin and Stephen Ward whose effort came from a 40 metre line ball. Limerick made a number of changes, both positional and in personnell and they fought back to level at 0-14 each, as the third quarter drew to a close.

With Cian Lynch causing huge problems for Clare around midfield and with Ronan Lynch deadly accurate from placed balls, the visitor edged two points ahead with 10 minutes remaining and Clare were clearly struggling. A number of puckouts were intercepted and scores resulted for the new champions, who were four clear with five minutes to play.

Ian Galvin and Bobby Duggan reduced the margin to two but Limerick weren’t to be denied and they were deservingly in front when the final whistle sounded.

Tags 4 in a row champions Limerick Munster u-21 final