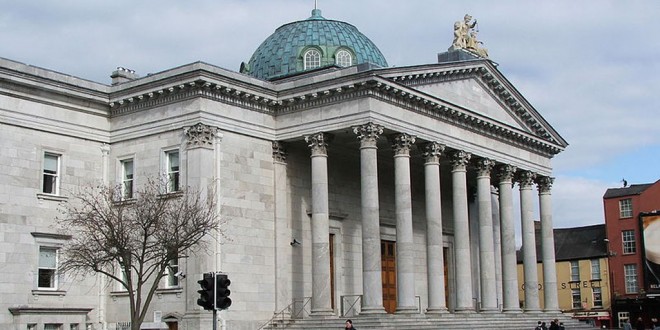 THERE was an angry outburst from the murderer of a 59-year-old homeless man as he was being sentenced to life imprisonment at the end of a three-week trial at the Central Criminal Court in Cork earlier this week.

David O’Loughlin, 28, who previously lived in Shannon for a period of time, was handed a mandatory life sentence for murdering Liam Manley.

The 59-year-old died from mechanical asphyxia after being trapped in a narrow metal chute with bags of rubbish just in front of his face. His body was only found when a maintenance man went to free the blocked chute on the fourth floor of an apartment complex.

During the trial hearing, the jury visited the crime scene at Garden City Apartments, North Main Street, Cork, to look at the chute into which Mr Manley was forced, to die a horrific death trapped by rubbish in the confined space in May 12, 2013.

Minutes later, they delivered a unanimous guilty verdict on David O’Loughlin, who had been living in a top-floor apartment at that complex.

He met the deceased in the early hours of the morning, brought him back to his flat and later assaulted him by punching him in the face. Mr Manley did nothing to defend himself.

O’Loughlin then dragged him outside the door, opened the steel door of the narrow chute and, in his own word, “tipped” Mr Manley into it headfirst.

In his defence, he claimed, “I thought he would slide down into the rubbish and go on about his business”.

Cross-examining him, Seán Gillane, prosecuting, said, “This is not a cartoon, it is not the Roadrunner running off a cliff”.
Detective Garda Noel Maxwell said O’Loughlin had two previous convictions for assault causing harm and two for assault causing serious harm – one in Ennis and one in Limerick – for which he got an overall sentence in 2006 of nine years, with the last two suspended.

He said the accused had a tragic upbringing and was, from the age of nine, in foster care and institutional care, including St Joseph’s in Clonmel, County Tipperary.

Brendan Nix, defending, asked the detective if he knew of allegations of paedophilia in one of the foster homes. When the detective said he did not, O’Loughlin reacted angrily from the dock. “Of course you don’t f**king know,” he said in a loud voice.

Mr Justice Paul Carney told the witness and the senior counsel to continue in spite of the interruption.
Mr Nix put it to the detective that he did not know much about the accused. O’Loughlin raised his voice again about the alleged paedophile in a foster home where he had been housed as a child, “If I f**king did it, I’d be up in court, wouldn’t I”.

Mr Manley’s sister, Kay Murphy, gave the family’s victim impact evidence in a very quiet voice. “Liam Manley was a son, a brother, an uncle, a granduncle, a nephew, a cousin and a friend. He was a kind, caring and quiet man who loved life. He was much loved by family members and friends.

“We as a family can’t find words to describe how we felt when [his] life was so tragically taken. To die in such horrific and frightening circumstances should be something no-one should have to endure. We feel hurt and sad. He didn’t deserve to have his life taken in such a way.

“He didn’t deserve to be put in a rubbish chute, four flights up. We wake at night thinking about his last thoughts. He was waiting to die so alone and isolated from the world because of the act of one person.

“We will have to live with this nightmare for the rest of our lives. It was distressing for us to hear how Liam was left to die afraid and alone. To try to imagine his final act of living was spent in with the rubbish is a tragedy. This will haunt us forever. Our hearts break for him.”

During the case, there was reference to someone referring to the deceased as a paedophile. It was accepted on all sides of the case from the accused to the gardaí, who investigated the background of the deceased as well, that there was no foundation to such an allegation. The family were wounded by the damage to his good name, the court heard.

“It was upsetting that Liam’s character was maliciously taken from him. His good name was tarnished by unfounded accusation. There has been no remorse shown for this vicious crime, only a callous disregard for his life and dignity.”

The family thanked the gardaí and they also thanked the staff of Clonmornin House and Simon for looking after him.
O’Loughlin drafted a statement with Mr Nix during a short adjournment between the jury verdict and the sentencing hearing. He presented it as six points, read on his behalf by Mr Nix.

“1. I want to say how deeply I regret that Mr Manley died.

“4. I never intended to harm or kill him. I simply wanted him to leave my apartment. I was horrified, shocked and remorseful, which I remain.

“5. I am sorry that his good name was taken. I did not know him and I certainly would not have thought of him then or now as a paedophile.

“6. I wish to sincerely apologise to his family and friends for the tragedy I caused and the pain the family suffered by his death.”

The evidence in the case consisted of CCTV evidence and eye-witness evidence from David O’Mahony, who was present in the apartment to see the assault and the victim dragged out and hear the door of the chute close later.

Gardaí said O’Loughlin put Mr Manley backwards headfirst into the chute, where he was trapped and suffocated.