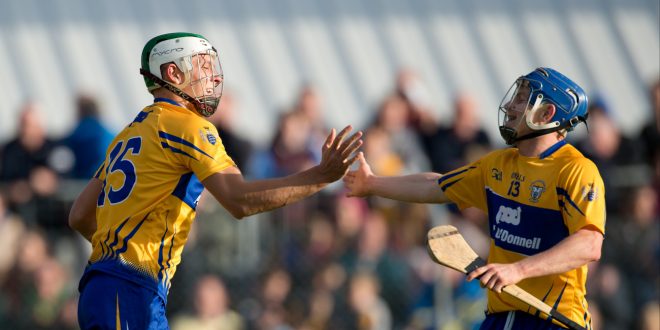 Laois no match for Clare

While anything other than a comfortable Clare win in this first round hurling championship qualifier would have been a big surprise, few would have predicted that their winning margin over Laois would have been so great.

The fact that thirty five points separated the teams is sure to lead to more debate as to what teams should be allowed into this competition. For the official attendance of 5,518, there was little to cheer about as the result was clear from a very early stage.

Clare’s determination to get back to winning ways after their Munster championship exit was evident from the outset and once they took control, they dominated throughout the field. Indeed it’s fair to say that their winning margin could have been greater such was their dominance on an evening when Laois goalie Enda Rowland denied Clare at least three further goals

There was little between the sides in the opening quarter at the end of which Clare had opened 1-5 to 0-3 lead but from here on there was only one team in it.

It was 1-9 to 0-5 pints after twenty seven minutes when Laois were reduced to fourteen men as wing forward Ben Conroy picked up a second yellow card which ended his involvement in the tie. Indeed, the midlanders were fortunate not to have seen red a little earlier as a nasty late challenge on Oisin O’Brien went unpunished.

From here on it was one way traffic and Clare had sealed their place in the next round by half time when they led by fifteen points, 2-14 to 0-5 with wind advantage to come.

Seven points in as many minutes at the start of the second half killed off any remote chance that the visitors to Cusack Park might have been entertaining of a comeback.

To add to their misery they were reduced to thirteen players when Charles Dwyer was dismissed on a second yellow card, six minuses from the end

There were a number of pleasing aspects to Clare’s win not least the fact that David McInerney returned from injury and contributed 0-3 when delivering an impressive display. Teenager Aron Shanagher was in sparkling form and he caused huge problems for the Laois defence throughout.

Once again Clare introduced their full complement of substitutes and, clearly there is great competition for places. Clare will be in action again next weekend when they will come up against either Cork, Limerick or Wexford.