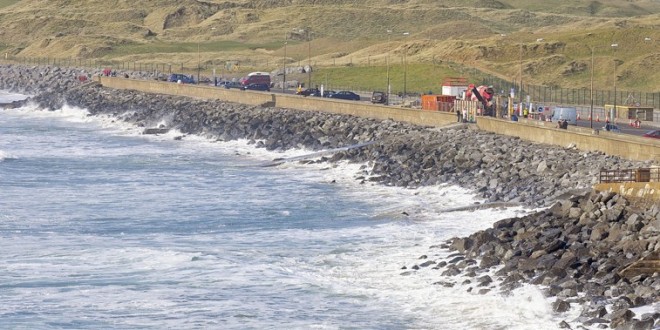 A DECISION by Clare County Council to refuse planning permission for a takeaway at 1 Main Street, Lahinch, has been appealed to An Bord Pleanála.

A letter sent to An Bord Pleanála on behalf of Tom Battersby, the appellant, said that he “is very aware of the significance of this prominent corner site in the physical streetscape of Lahinch and does not wish to detract from this significance in any way whatsoever. In this context, therefore, my client does not wish to introduce any type of business operation that would impact negatively on this or any part of Lahinch town.”

It also stated that “a ‘takeaway’, in this particular instance, does not equate with the common or more usual definition of a takeaway facility. Typically, a ‘takeaway’ refers to a fast food facility for the sale of foodstuffs of a deep-fry variety or similar, for consumption off the premises and which are sold in paper/cardboard, cartons or the like. Generally, a takeaway business comprises a whole-day operation, with much of the business taking place late into the night. Such businesses generate a lot of paper, cardboard and plastic refuse and generally require the provision of refuse receptacles outside and in close proximity to the premises, which can give rise to litter.

“In addition, such businesses attract large numbers of patrons at any one time and, more particularly, late at night after pub and disco/night club closing times, with the consequent noise disruption associated with such congregations.”
The letter claimed that the development which has got the go-ahead there will comprise a standard café/restaurant but that Mr Battersby “wishes to increase the viability of his business by offering a retail facility for the sale of some foods prepared and cooked on his premises at the café counter”.

The letter explains, “These foods (ranging from the humble scone to lunch/dinner main courses) would be served in containers and would be consumed at home or place of work. By virtue of the nature of such cooked foodstuffs, they would not be suitable for consumption on the street, as is typical of the variety sold in a typical fast food takeaway facility. Indeed, some foods would require reheating before consumption.”
The letter stated that the type of retail facility proposed would not generate litter around the premises and that it would not attract large numbers at any one time, particularly late at night.

The letter said that what is proposed would be similar to certain businesses in Ennis.
“The appellant believes there is a demand for this type of retail service in the Lahinch area. For the sake of clarification, I wish to refer to similar types of businesses operating in Ennis Town, which to all intents and purposes are sit-down café/restaurant businesses but, in addition, operate retail sales of hot and cold foodstuffs – Zest and The Food Haven, both of which are in the Market Place, Ennis, and The Sherwood Arms in the Tesco shopping centre, Ennis.

“These retail sales of hot food, for consumption off their premises, do not generate any additional refuse, nor do they attract large groups of patrons at any one time nor do they detract from the visual amenities of the premises or their environs. By extension, the retail provision proposed at this café/restaurant in Main Street, Lahinch, would not detract from the visual amenity of Lahinch.”
The planners’ report carried out said that there could be “an over-concentration in takeaway facilities in the town centre and, consequently, may have a negative impact on the vitality and viability of the town into the future.”

Responding to this, the submission on behalf of Mr Battersby reiterated that a typical fast-food takeaway is not what is being proposed, while it adds that those operating such takeaways haven’t expressed concern through the planning process.
“This concern regarding over-concentration of takeaway facilities in the town centre is predicated on the assumption that the proposed development equates to a typical fast-food takeaway facility. As explained heretofore in this submission, this is not the case and the council or An Bord Pleanála should have no concerns in this regard. The appellant is fully cognisant of the number of takeaway facilities in close proximity to his premises and does not intend to add to their number.

“We would also draw your attention to the fact that there were no submissions/objections lodged on the planning file in relation to the proposed development. We put this down to the fact that the owners of the existing typical takeaway facilities operating in the town are fully aware that the type of business being proposed by Mr Battersby is totally different to theirs and, for this reason, they do not see the development as proposed as a threat to their business.”

It concluded by saying that the operations proposed “will have absolutely no effect on the external appearance of the premises nor will the development generate activities either inside or in the vicinity of the premises that will detract from its important setting in the streetscape of Lahinch.”
That letter, on behalf of the appellant, was sent on February 21 and a letter sent to An Bord Pleanála on February 25 by Dolores Conroy of the County Council’s

Planning and Enterprise Development section urged it not to overturn the original decision.  “Clare County Council respectfully requests that An Bord Pleanála uphold its decision on P13-632 as it considers that the operation of a fast-food takeaway at this location would detract from the amenities of the area.”