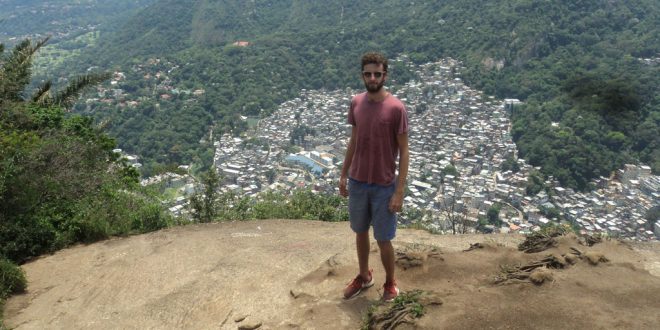 TWENTY-five-year-old Lahinch man Michael Healy is this week starting his journey towards a post-graduate teaching qualification in London. There is nothing too extraordinary about that but Michael’s four and a half year teaching career to date has encompassed three continents and exceptionally varied living conditions.

The UL graduate has been teaching English in Spain, Portugal, Ghana and Brazil in recent years, along with introducing basketball to a remote village, straddling a rainforest, in West Africa. Late last year, he spent three months in Rio, just after the Olympics.

“It was a good next step for me. I had learned Spanish in Spain and my girlfriend had lived for three years in South America in Spanish-speaking countries. She wanted to go back to South America and I had been in Portugal before. We moved over there at the end of August. We had an apartment in Copacabana, which was nice. I’d get up in the morning, throw on my togs and head across the road to the beach,” he recounted.
Sounds very similar to life in Lahinch?

“Nothing is ahead of Lahinch beach,” he laughed.

They taught there for three months and noticed a discernible change in atmosphere once the Paralympics concluded.

“The plan was to stay over there for the full school year but the visa situation is pretty tricky. The government decided about 20 years ago that Brazilian people are perfectly capable of teaching English themselves. If you go over, you’ll see that hasn’t worked out too well. So we can only go on tourist visa and work for three months, twice a year.

“Once the Olympics and Paralympics finished, the place went a bit mad. It got so, so dangerous. It’s a pretty bad time at the moment for Brazil. There are marches through the city centre every day to get the former president back in. Socially, I’ve never been to anywhere so crazy, even compared to Ghana or Lahinch,” Michael maintained.

However, Rio was very calm during the Olympic and Paralympic games.

“For the Olympics, Rio was kept completely under control. Police came from all over Brazil. When I arrived, I went to the beach and they were all there with machine guns. Pure friendly and they’d give you directions and I was thinking, ‘I don’t know why people said this was so dangerous. This is grand.’

“But the day the Paralympics finished, it was like the Wild West. You could see people coming down from the slums and the rate of crime just rocketed. I was teaching four days a week in businesses and then one day a week, I volunteered in the favelas with kids.

“When you look at a picture of Rio, you have all the hills but each one of those hills has a favela. You could take a picture of the richest district and next to it is the biggest favela in the country.”

Almost five years ago, Michael headed to Africa, where he taught English for six months. It’s a time he remembers fondly.

“I was in Ghana in 2012. I was living in a tiny village. I had been playing basketball all my life in Ennistymon. Our coach, Stephen Leigh, sent over loads of stuff and we ended up setting up a basketball team in the school I was teaching in. It was a public school in the middle of a rainforest. There was one road into the village and behind it was 40 miles of rainforest and on either side about 60 miles of rainforest. I used to cycle through the rainforest every morning and by the time I’d get there, it would be over 50oC. It got to about 54oC one day.”

Local people had virtually no money but they were self-sufficient.

“They had their land and they had their food. All my kids were absolute tanks from working on the farm. They didn’t own money but they had everything they needed. They needed food and that was it. They have their school uniform, their shirt and their shorts. Other than that, they had one set of clothes. They were the happiest people I’ve ever met, anywhere in the world. We had electricity and water about four days a week. There was an internet café about half an hour away and we used to go up there one or two weekends a month. It was surreal, looking back. I’m not on social media the whole time, so it suited me,” he reflected.

As the Lahinch man prepares for life in London, he is hoping that his teaching career will help him keep his passport stamped in the years ahead.

“I’d like to keep moving about, to be honest. Once I do the post grad, I can make more money than what I’m doing now and use it to keep travelling,” Michael concluded.