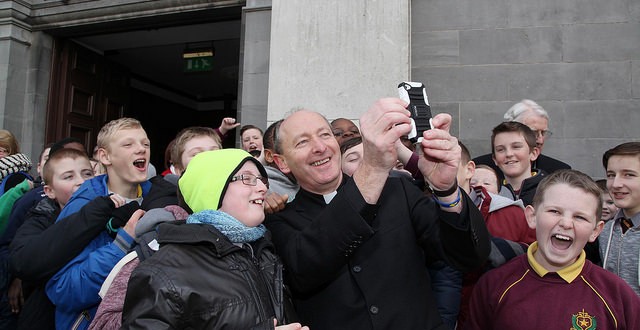 Fr Alphonsus Cullinan from Lahinch, who apologised this week for misinforming the public on the HPV vaccine, pictured here taking a selfie with well-wishers after his appointment as bishop of Waterford and Lismore

Fifty-five-year-old, Fr Cullinan is a son of Christy and Rita and has four sisters and five brothers. He is parish priest in Rathkeale, County Limerick

His family moved to Limerick city where he attended the Salesians for early education, John F Kennedy National School and the Crescent College Comprehensive (SJ) for his secondary education.

From 1978-1981 he attended Mary Immaculate College of Education Limerick and qualified as a primary teacher and taught for six years in Castleconnell, County Limerick.

He worked part-time during that time for four years with the Bunratty Castle Entertainers before going to Spain where he taught English for two years in a school in Valladolid.

Fr Cullinan studied at Saint Patrick’s College Maynooth from 1989-95 where he completed an STL (Licentiate in Theology). He was ordained by Bishop Jeremiah Newman in 1994 in Saint John’s Cathedral, Limerick, and appointed Curate in Saint Munchin’s Parish Limerick city 1995-1996.

Fr Cullinan’s next appointment was as chaplain to the Regional Hospital in Limerick from 1996 until 2001. He studied for his doctorate in moral theology in the Alfonsianum in Rome 2001-2004 and was appointed chaplain to the Limerick Institute of Technology 2004-2011. He was appointed parish priest in Rathkeale in 2011.