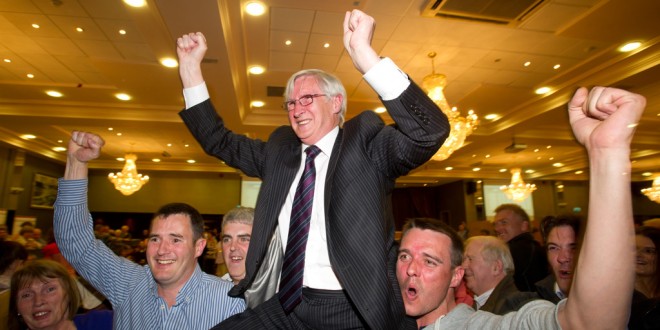 Outgoing Clare County Councillor, Michael Begley became the third member of the local authority to secure re-election at around 11.10 pm with 1,799 votes.

The Independent Councillor admitted the loss of 320 from nearby Parteen concentrated his mind and his supporters to get those votes back.

Acknowledging the lack of competition from another Clonlara candidate was a big help in his re-election bid, he identified three pools of votes to secure some additional votes.

These included votes left behind by outgoing Councillor Pascal Fitzgerald and Councillor Cathal Crowe, who moved from Killaloe to the Shannon Municipal District and the decision of former Fine Gael Councillor, John McInerney not to re-enter the race.

While all these votes were party votes, he managed to get enough of them to eventually secure his re-election. His re-election bid was also helped by the fact he was the only independent candidate out of the starting line-up of ten.

He pointed out there was no comparable territory in the constituency to get these votes back.

“It is 60 miles from my house in Clonlara to New Quay and I did go there. Some candidates talk about burning shoe leather while canvassing. I wore car tyres. I had to drive to every house once I left Clonlara.

“My transfer from Joe Cooney was similar to the last election. The fact that Joe Cooney got such a huge vote threw things out of kilter for his colleagues, particularly Joe Arkins, who unfortunately got a low transfer.

“It will be very challenging representing a big area. No matter what way councillors work it out, we will have to cover a much bigger area,” he said.