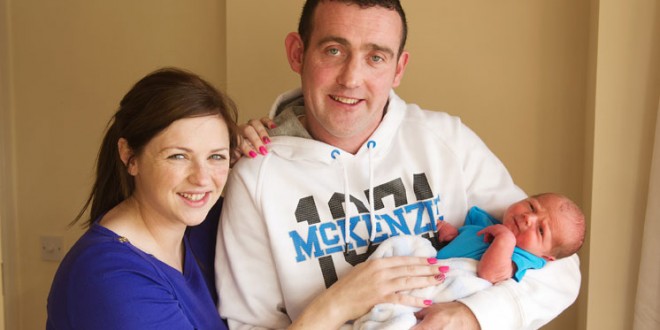 Catherine Desmond and Trevor Maxwell at home in Kilkishen with baby Kyle. Photograph by John Kelly

KILKISHEN couple Catherine Desmond and Trevor Maxwell’s son Kyle decided he wanted to make a grand entrance and as his parents could hear fireworks ringing in the new year, he decided it was time he joined in the celebrations.

Catherine and Trevor were over the moon to welcome baby Kyle Kevin Maxwell at 1.33am on January 1 at University Maternity Hospital, Limerick, making him the first baby born in the Mid-West in 2014.

“It was a nice surprise, definitely I didn’t expect it. He was actually late. He was due on Sunday, December 29. My last boy came early so I was expecting him around Christmas Day but he decided he wanted to make a big entrance and wanted to be known. The fireworks started going up and Trevor got to look at them for a few seconds before he had to get back here to me,” Catherine said.

She added that she was due to go into the maternity hospital that Thursday if he didn’t arrive but on Tuesday night, Kyle had other plans.

“We got to the hospital for 11.30pm and it was 1.33am before he made an appearance, so we rang in the new year on the labour ward,” Catherine said.

She was delighted to be allowed home with Kyle on Thursday morning. “I’m blessed. He was a tough labour but he was worth it,” she said.

She added that when the couple found out they would be expecting a boy back in October, the GAA was bound to factor.
“His father is delighted that he has a January baby. We are both big into the GAA, I’m actually a Cork woman but he is a Sixmilebridge man so we had an eventful year with the GAA in the house,” she said.

Indeed 2014 will be an eventful year for the family, as on the week of Catherine and Trevor’s birthdays in September, they will also celebrate their wedding.
The second baby to be born in the University Maternity Hospital, Limerick was also a Clare baby, arriving just 11 minutes after baby Kyle.