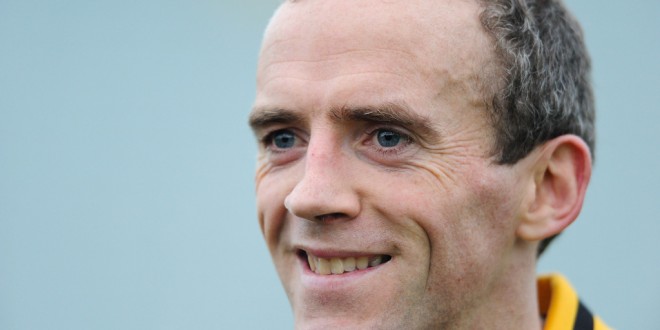 Paudie Kissane has stepped down as Clare football coach.

A VERITABLE glow of satisfaction exuded from Clare coach, Paudie Kissane as he spoke outside the Clare dressing room in Dungarvan.

An All-Ireland winner with Cork in 2010, the now retired wing-back has played on the biggest stages available to a Gaelic footballer but last Sunday, it was clear what an opening win in Waterford meant to him.

“The first half was a bit mixed and for the first 10 minutes of the second half, we were under a bit of pressure. They were coming forward but we didn’t panic and we forced them to make mistakes and caught them on the break and got some good scores,” was Kissane’s analysis of Clare’s seven-point win.

Clare started with U-21s Martin O’Leary and Jamie Malone in the full-forward line. Kissane made it clear that age or experience aren’t something that he dwells on.

“If you want to see what a guy is made of and try to give him a chance to develop, you have got to give him an opportunity. Five minutes here and there isn’t going to work. If a fella has worked hard and put his hand up, for us it doesn’t matter how long he’s been there or what he has done. It’s about getting the best team out on the pitch.

“Lads got their opportunity today. It went well for some and not so well for others. It’s all about learning and looking forward to Sunday,” he asserted.

Clare introduced six substitutes from what was a strong-looking bench.

“You need depth. It’s a 21-man game. We had the likes of Gordon Kelly and Mike O’Shea coming on there with loads of experience. That’s what you need. Hopefully, we’ll keep it up as time goes on.

“We’re delighted with the win, first day out. Poor conditions and we probably have a poor track record down here but we know there’s still plenty to work on,” Kissane added.

“The players know that themselves too. We conceded a late goal there at the end, which was a pity because we were defending well. There’s loads to work on but it’s great to look forward to training with a win, rather than a loss,” he concluded.

“It was a very pleasing performance. It was a big scoreline on a heavy pitch. We got to use a good few of the panel members as well, so it was great to get a good start. Colm [Collins] made the point at half-time that we were two points up against Waterford last year and we had played against the breeze.

“We weren’t going to sit back this time and wait for them. That was one thing that was stressed at half-time; to push on and get a few more scores. I think when Podge [Collins] got that score, we pushed on after that,” he reflected.

“You’d have to give fierce credit to Paudie. Since he came in, he has been advocating a certain game plan. Lads understood that and they were working for each other. I thought it was a very good team performance. The lads who came on worked hard for each other too,” the St Caimin’s Secondary School teacher added.

As for this Sunday, Keane is expecting a huge battle against Leitrim, who beat Antrim last weekend and retained the FBD Connacht League the previous week.

West Clare native Peter O'Connell has worked for The Clare Champion for 12 years and covers everything from sport, especially GAA, news, features and has been even known to branch into the fashion scene on occasion.
@@westclarepage
Previous Tubridy and Hartnett doubtful for Leitrim game
Next First Start for Tony Kelly