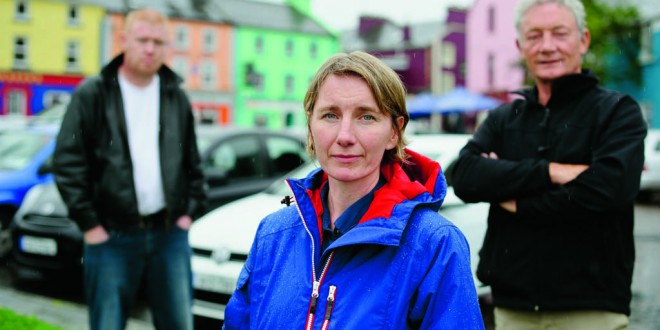 Kinvarra's Vicky Donnelly with John Griffin, at right, and Frank Naughton. Together they have co-ordinated a boycott of Israeli goods in local businesses. Photograph by John Kelly.

The group behind Kinvara’s business boycott of Israeli goods has described the response to the collective move as “overwhelming”.
Just over a week ago, three local people, inspired by the images of Gaza on their television screens, decided to approach businesses in the area to see if they would take part in a boycott of Israeli goods.

Since the boycott was announced in last Thursday’s Clare Champion, John Griffin, Frank Naughton and Vicky Donnelly have been inundated with support locally, nationally and even internationally.

“The response has been overwhelming. We were really taken aback from the level of the response and the good feeling from the article and on social media. It seems to have really hit a chord with people,” Ms Donnelly said.

“All three of us have been approached by people in the community who are delighted to see an action like this happening here. We have received messages of support across social media and even by phone. We have had calls from people who want to do this in their own community and are looking for advice and suggestions about how to do it in their town or village. We have had calls from Cork, Dublin, Northern Ireland and a man in France, who was so inspired by what he saw on the internet about what is going on in Kinvara that he wanted more information,” she added.

The three approached retailers, cafés, restaurants and salons in the village on Monday last and by Tuesday afternoon reported unanimous support for the collective action. Within a week of the boycott beginning, there were nearly 18,000 hits on the article on The Clare Champion’s website, www.clarechampion.ie, and over 13,000 shares from it on Facebook. It also received national coverage.
“We have just sent a letter around thanking the businesses, so they are aware of the level of good feeling we received about this. The feedback from the business community here is that people are happy with it. They are happy to have taken a position, even if it is a very small thing, they feel that they are sending a message of solidarity to Gaza from Kinvara,” Ms Donnelly stated.

“That feeling of helplessness all of us have, everyone we speak to would like to do something, their little bit to help this situation and there is something about the business community coming together that has shown people we can do something. I think that counters the feeling of isolation and helplessness that you get when you are at home watching the images on the television,” she continued.
Mr Naughton said one of the biggest surprises for the three when they began this campaign was the reaction of the business people they approached.

However, not everyone is happy by the village’s stance.

Mr Griffin noted that people in the area are “increasingly well-informed” on events in Gaza and Israel and that “because the village took a position on this, it has made it an issue in Kinvara.” He believes this local action has meant the community is “more engaged”.
As people have heard about the campaign, the group has had numerous offers of help, according to Ms Donnelly and now plans are afoot for further action.