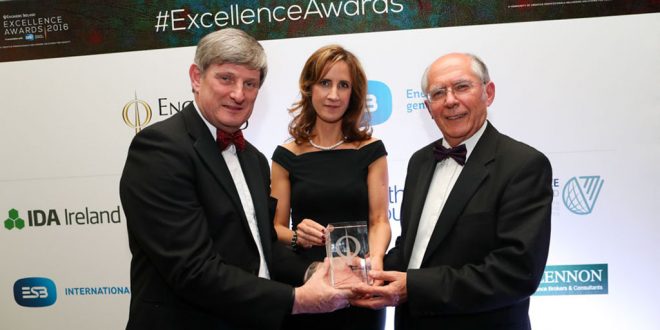 In his work at Dublin City Council, Phillips has been responsible for strategic planning of infrastructure and implementation of ground-breaking projects such as the Dublin Port Tunnel, Ringsend wastewater treatment works, the Santiago Calatrava bridges of James Joyce and Samuel Beckett and latterly, the Rosie Hackett Bridge, over the River Liffey.

The overall Engineering Project of the Year Award was won by the Corrib Onshore Gas Pipeline. The winners were announced at the seventh annual Engineers Ireland Excellence Awards, in association with ESB, at a special ceremony held in the InterContinental Hotel in Dublin.

Speaking at the awards ceremony in the InterContinental Hotel Dublin, Caroline Spillane, Engineers Ireland Director General, commented on the vast array of engineering talent that had gathered for the flagship awards ceremony.

“The engineering profession is the real winner of this year’s awards. We in Engineers Ireland are delighted to showcase and celebrate the incredible achievements of some of the best engineering talent in the world. Michael Phillips is the very epitome of the creativity and innovation that exists within the profession.”