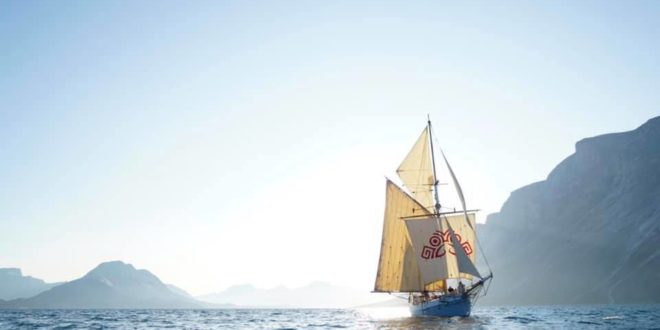 The maritime training vessel, The Ilen, will be at Kilrush Marina on August 27 and 28, as part of the Scairt na hÓige youth festival.

KILRUSH and Scariff are to be included as venues for a youth festival taking place at the end of August to celebrate maritime arts, heritage and culture.

Scairt na hÓige is being organised by the Local Creative Youth Partnership (LCYP) of Limerick and Clare Education and Training Board (LCETB) and will also take in locations around the Shannon Estuary including Foynes and Limerick City. The youth participation festival takes the Shannon waterway as its inspiration and will feature workshops in a range of art forms and maritime culture.

Music Generation Clare and Music Generation Limerick City, both partners in the festival, will deliver workshops and performances in Kilrush and Foynes against the backdrop of the magnificently restored historic ship ‘Ilen’, when it sails into the lower Shannon, mooring in each harbour town for two days.

“Over the course of the ‘Ilen’ visit, Kilrush Marina and Foynes Yacht Club will become animated with workshops in music, dance and story as well as in a range of sailing ship traditions; from tying knots to making signal flags and visiting the good ship ‘Ilen’,” said Monica Spencer LCYP Coordinator.

“A pop-up cinema in Kilrush in the Merchant’s Quay Business Quarter will screen popular films throughout Friday August 28. This is a festival feature that comes in direct response to young people articulating the need for greater cinema access in the West Clare town.”

Young dance enthusiasts will be glad to hear that hip-hop dance artist, Tobi Omoteso is the featured artist of Scairt na hÓige and Tobi will lead workshops in Kilrush, Foynes and in Limerick City.

Scairt na hÓige is presented in response to the voices of young people, heard through a consultation process initiated by the Local Creative Youth Partnership in July 2019. “Since that time, the LCYP has consulted with over 300 young people in 26 different settings in order to get an idea of the kinds of creative activities they enjoy or would like to try out,” Ms Spencer noted.

Based on this consultative process, the LCYP has already delivered a programme that includes an art mural in Scariff.

With Music Generation Clare and Music Generation Limerick City as its key partners for Scairt na hÓige, the LCYP aims to enable young people to celebrate range of cultural opportunities, against the backdrop of one of Ireland’s most spectacular landmarks.

Fiona McGarry joined The Clare Champion as a reporter after a four-year stint as producer of Morning Focus on Clare FM. Prior to that she worked for various radio, print and online titles, including Newstalk, Maximum Media and The Tuam Herald. Fiona’s media career began in her native Mayo when she joined Midwest Radio. She is the maker of a number of radio documentaries, funded by the Broadcasting Authority of Ireland (BAI). She has also availed of the Simon Cumbers Media Fund to report on development issues supported by Irish Aid in Haiti. She won a Justice Media Award for a short radio series on the work of Bedford Row Project, which supports prisoners and families in the Mid-West. Fiona also teaches on the Journalism programmes at NUI Galway. If you have a story and would like to get in touch with Fiona you can email her at fmcgarry@clarechampion.ie or telephone 065 6864146.
Previous Impressive Eire Óg Off To A Winning Start In Clare SFC
Next Defeat of Sinn Féin childcare motion is “hugely disappointing”