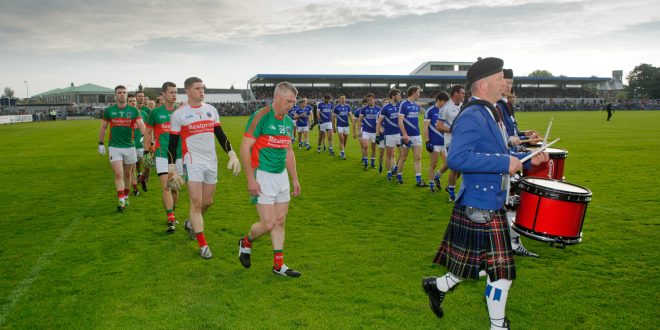 Kilmurry Ibrickane have added the Cusack Cup to their senior championship and U/21 A titles. Photograph by John Kelly.

THE mid Winter evening of December 9, 2016 will be fondly remembered in the history of Kilmurry Ibrickane GAA club. Last Friday in Kilmihil, Kilmurry added their sixth successive Cusack Cup to the senior championship and U/21 titles already won.

That they did so was largely thanks to 1-2 from play, all in the second half, from centre back Martin McMahon. Interestingly, while McMahon was definitely the most influential player on view, he was challenged for player of the match by second half substitute Declan Callinan, who won several breaks, in the Kilmurry half back line.

Kilmurry played their best football in the second half, having been out played for much of the opening half hour.

Doonbeg led 1-3 to 0-4 at half-time but they were dealt a huge blow five minutes before the interval, when Colm Dillon was black carded for a late shoulder on Ciaran Morrissey.

Dillon should have been yellow carded but a black seemed harsh, given that Morrissey was not involved in the next phase of play, as the ball had been transferred infield. That said, Dillon did not need to hit late and his absence definitely cost Doonbeg.

Michael Tubridy put away Doonbeg’s goal in the eighth minute, picking up the rebound from a Colm Dillon shot.

Kilmurry needed to lift their game on the resumption and they did that, reverting to a more possession based game, rather than trying to hit Peter O’Dwyer with long ball at full forward.

McMahon put away his goal three minutes after half-time. Eamon Tubridy came off his line to deal with a Keelan Sexton delivery, along with two Doonbeg defenders. The ball broke to McMahon who slotted it home.

Going into the last five minutes, Kilmurry led 1-8 to 1-5 but points from David Tubridy and Enda Doyle left just a point in it. McMahon and Tubridy (f) then exchanged points as Doonbeg pushed hard in an effort to force extra-time.

However they left the middle third exposed and Kilmurry broke at pace a minute into injury time. They moved the ball from the left corner back position, up field, with about seven players involved in the move. Steven Moloney, Keelan Sexton and Johnny Daly placed Michael O’Dwyer who finished neatly and that was that. Kilmurry won The Clare Champion sponsored Cusack Cup for the sixth successive time and were also presented with €2,000 in prize money, while Doonbeg received €1,000.

A more comprehensive report and post match interviews will be published in Thursday’s Clare Champion.