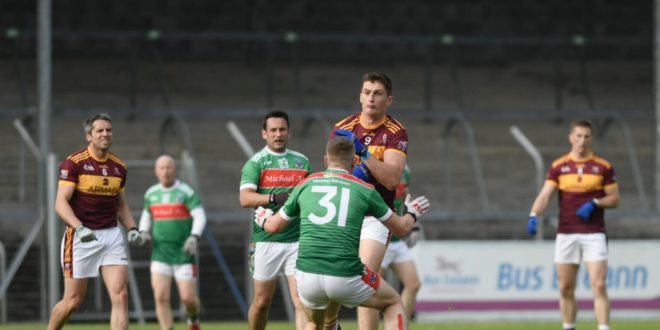 Action from Miltown v KIB in the Clare SFC. Pic by Eugene McCafferty

A strong closing quarter saw Kilmurry Ibrickane exact revenge on Miltown in the opening round of this year’s Clare SFC.

Aidan Moloney’s side outscored the defending champions by 0-5 to 0-2 in that period to move through to the winners section of the championship and within touching distance of the last four.

Kilmurry rang the changes before the throw in as regular goalkeeper Ian McInerney was deployed on the edge of the opposition square. His nephew David Sexton was handed a championship debut while veteran Michael O’Dwyer was named in the half-forward line. Miltown were without Kieran Malone and Darragh McDonagh from the side that won this fixture in last year’s county final but debutant Cian Mahoney adapted well to his first senior assignment.

The champions settled best to  lead 0-4 to 0-1 at the first water break with the Cleary twins Eoin and Conor kicking some brilliant scores to put them in the ascendancy. Kilmurry’s sole reply came from a Keelan Sexton free with Miltown looking much more composed in the opening quarter. Brian Curtin’s free role in defence was cutting down on space while Sean O’Brien’s restarts were giving Maurice Reidy’s side the platform from which to attack.

A turning of the tide before half-time was partly down to Kilmurry re-organising for those kick-outs and the pressure told as they began to get a foothold in the opposition half. Keelan Sexton and Cormac Murray swapped scores but Miltown lost wing-back Euan Reidy to a black card soon after. Kilmurry capitalised with scores from Michael Hogan and an Ian McInerney free to leave just the minimum between the sides at the break.

The game was level inside a minute of the new half as Shane Hickey finished off a good team move, while further pressure led to another free for Sexton as Kilmurry hit the front for the first time in the contest.

That momentum was halted when Dermot Coughlan was sent to the sinbin with Miltown returning to the full complement as Reidy returned. Miltown notched their first score in almost 15 minutes to restore parity as Mahoney fired over to tie the teams up at 0-6 each.

Michael O’Dwyer fisted over to put Kilmurry back in front but they were reduced momentarily to 13 players as Michael Hogan was also shown a black card. Darren Hickey was shown a yellow for pulling back a goalbound Eoin Cleary and the county captain slotted the free to level the game at 0-7 each ahead of the final quarter.

Cleary was in brilliant form from frees and his fifth point of the evening saw Miltown edge back in front. A big moment arrived shortly after when David Sexton produced a point blank save to deny Cormac Murray, and Kilmurry were back on level terms when Dermot Coughlan sent over a brilliant score.

Kilmurry’s experience was telling as another came their way with Daryn Callinan putting back into the lead. The pressure on the kickout led to another free for Sexton and the 2017 champions moved 0-10 to 0-8 clear with less than five minutes to play. Dermot Coughlan fired over another from distance and the gap was three with the game in injury time.

Daryn Callinan and Eoin Cleary swapped points to close proceedings but it was Kilmurry who were on the right side of the result at the final whistle.