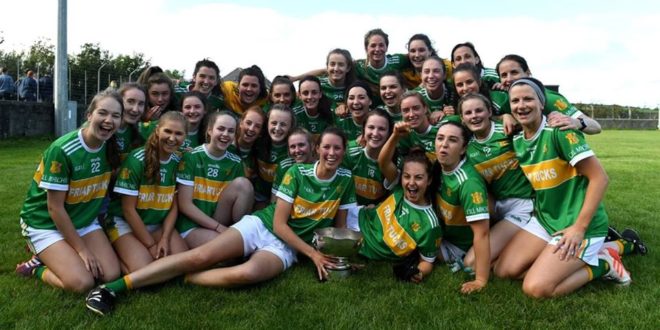 The 2020 Clare Ladies football championships get underway on Monday evening with games down for decision in the senior and intermediate divisions.

After their maiden success last year, reigning champions Kilmihil will be bidding to follow up that historic success by defending their title, with the first step on that road coming against Doora Barefield in Gurteen.

The holders are joined in their group by the Parish, and by the parish closest to them in the form of last year’s intermediate champions Cooraclare.

Having led Kilmihil to their first title last year, the management team of Kevin Callinan, David O’Brien and David Anglim are guiding the ship once more.

Callinan is looking forward to another positive campaign, and doesn’t expect the mantle of champions to be one that brings any pressure with it.

“It is a brand new experience for us to be coming out onto the field as county champions. We were long enough trying to get over the line and we got there last year. There will be absolutely no pressure as far as we are concerned. We tried for a long time and eventually reached the summit and won our county championship. I think overall we have proven to the rest of the county that the title is there to be won by any club. We have huge respect for all the clubs involved and would have great admiration for the work they are doing”, he noted.

Kilmihil’s victory last year brought an end to the most dominant period in Clare ladies club football with the Banner having ruled the roost for the previous eight campaigns. Kilmihil had suffered defeat to the same opposition in the previous three finals, but Callinan admits he always felt they were closing the gap.

“Teams are getting closer all the time and I have been saying it for a few years. I felt that someone would eventually come and knock the Banner off the top and thankfully we were the team to do it. West Clare Gaels did it before too and they are still there, the likes of Cúil Gaels are strong, you have the last two intermediate champions in Doora Barefield and Cooraclare, and all those teams have a lot of talent. Doora Barefield and Cooraclare are really strong sides and they are in our group so we are going to really have to be ready for them because they will be tough opposition”, he stated.

This year’s championship is set to be completed over a seven week period, with the opening round on Monday evening and the final pencilled in for September 20. Kilmihil travel to Gurteen to face Doora Barefield in the opening round , and Callinan feels everyone is glad to have a championship to play for this year.

“It looked for a while that we might not have anything to play for this year and that was the same for all the clubs. It was unbelievable stuff when the pandemic struck and we are aware that it is far from over, but all we want to do now is play football. Training time has been short this year because of it, but in fairness to the girls they were all doing their own bit away to stay fit in the hope that they would be ready if a championship happened. We have been able to do a bit more over the last few weeks together, we have good numbers at training and they are putting in a good effort. They are all in it together and they are all playing their part so they are very easy to work with” he outlined.

Kilmihil are joined in their group by last year’s intermediate champions Cooraclare, who meet the senior holders in their opening round next week. Club stalwart Ann-Marie Callinan is part of the management team while also answering her club’s call by taking up the goalkeeper’s position.

The former county star admits it was a huge relief for the club to finally break through back up to the senior ranks.

“It was great to do it particularly after the disappointment of being beaten in the final the previous year which was heartbreaking. We came back last year with a full panel and our one goal was to get back to the final and hopefully get over the line which thankfully we did. It was a really exciting and close game against Miltown and we knew it would come down to the wire. There was only a kick of the ball between the sides at the end and we were just glad to be on the right side of it. We know it will be a big step up to be back in the senior ranks now”, she outlined.

The Sky Blues were once the dominant force in Clare ladies football, and will be coming into this year’s campaign with a number of promising young stars along with more seasoned campaigners. County stars like Keeva Corry and Roisín Looney are joined by last year’s captain Orlaith Reidy and the returning Aifric O’Neill, and Callinan feels that mixture is something that will stand to them.

“We have a nice blend of youth and experience in our squad so it will be a good test for us. It is great to have the chance to play because for a few weeks there it did not look great. The girls had been training away and going to the West Clare Sports and Fitness track in Clonreddan to do some running, but everyone is delighted now to be back together again. We have good numbers training and things are going well” she noted.

The meeting of the current senior and intermediate champions in the second round of action is one that is sure to draw plenty interest. There was dual celebrations last year when the victorious Kilmihil squad stopped in Cree on the way home to join in with the festivities already underway to celebrate the Sky Blues success. They will be direct opponents this time around, and Callinan outlined that the local derby element will bring added intrigue.

“It will be a big test against the reigning county champions but hopefully we will give them a good game and you would never know what can happen on the day. They have so many experienced players but this is the level we want to be at so we will hopefully push on. We had great evening last year on the day of the final when we all met up in Cree and it was special to have the two cups back in West Clare. A lot of us went to school together and there are relations on either side of the fence so it will be a different experience and hopefully we can step up to the challenge”, she said.

The intermediate championship also gets underway on Monday with three games down for decision. Liscannor host Fergus Rovers in Moher, Doonbeg are at home against last year’s beaten finalists Miltown, while Kilmurry Ibrickane make their return when they host Eire Óg in Quilty.