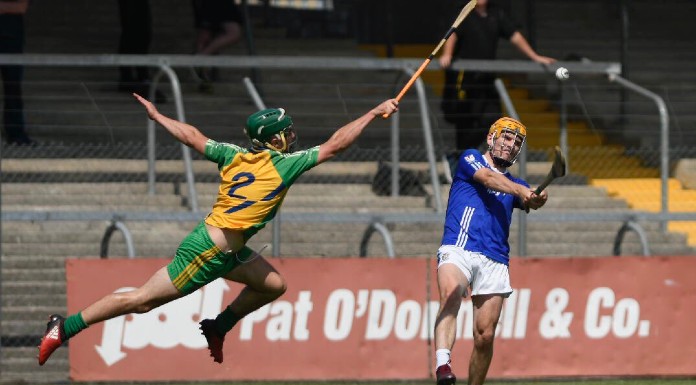 It had the makings of a rip-roaring contest but by the time Ken Kennedy slammed home the only goal of the game, the result was long since decided.

A second-half which saw Kilmaley outscore the Combo by 1-13 to 0-5 summed up the non-event nature of the game as a much slicker and committed outfit end a wait of 18 years without the Clare Cup title. A scoring spread of ten different names along with a strong bench also greatly aided their cause.

It was the first senior silverware of any description for Kilmaley since the championship was last annexed in 2004 and on this form they will be certainly be in the reckoning to end that drought too. John Carmody will not allow his troops to read too much into this though as the real test of championship awaits this weekend when Eire Óg are the opponents.

The Combo were forced to play the last quarter of the game with 14 men after county star David Fitzgerald picked up a second yellow card as tempers threatened to spill over. At that stage Kilmaley led by 0-19 to 0-12 and any chance of a fight-back was put to bed.

The opening exchanges were somewhat competitive with the sides level at 0-5 each after the opening ten minutes. Kilmaley raced into a 0-4 to 0-0 lead with Cian Moloney (2), Mikey O’Malley and Cathal Darcy all on target. A quick-fire brace from the Arthur duo of Niall and Ger cut that deficit in half, before two brilliant reaction saves from Pa Kelly kept his goal intact.

Ken Kennedy and Cian Moloney both tried their luck from close range in the same move but found the 2013 All-Ireland winner in no mood for yielding as he produced two point-blank stops. The second of these fell to Sean O’Loughlin and he slotted over to ensure they left with something on the board.

Three unanswered scores from Aidan McCarthy, Jason McCarthy and David Mescall appeared to signal Inagh-Kilnamona’s arrival to the game as they drew their side level after a nervy opening.

It was as good as it got though with Kilmaley’s free-flowing forward line benefitting from the hard work being done in the middle third as O’Malley, Conor Cleary, Daire Keane and Tommy Barry mopped up possession and used it to good effect. O’Malley was brilliant throughout and when he picked up a loose clearance to lash it over from the middle of the park, it left Kilmaley 0-9 to 0-5 ahead with less than ten minutes to go to the break. Points prior to that from Moloney (2) and a brilliant effort from Tom O’Rourke stamped their authority on the game and set a cushion that would not be breached.

The Combo were struggling to make possession stick and were guilty of wayward shooting from distance as the half wore on. Niall Arthur frees were keeping them hanging on Kilmaley’s coat-tails but they never looked like troubling them. The sides traded scores in the closing stages of the opening period and as they headed for the dressing rooms, it was Kilmaley ahead by 0-13 to 0-9 with the breeze to come at their backs in the second-half.

O’Malley used that wind to great effect with the opening action as he sent over a free from inside his own half on the far side of the ground. This was answered by a good score from Evan McNamara, but another long range effort from O’Malley along with tidy scores by O’Rourke and Cleary saw Kilmaley move 0-17 to 0-10 clear after 40 minutes. Pa Kelly was called into action again when O’Rourke was sent clear by the hard-working Mikey O’Neill but Kelly saved well at his near post.

The game began to peter out and when Fitzgerald was dismissed, it meant the result was beyond any reasonable doubt. Sean O’Loughlin, Moloney and Cleary continued to keep the scoreboard ticking over with Arthur and Aidan McCarthy firing back in response. Kilmaley sent over three in a row in the closing stages through Eamon Bracken, O’Neill and O’Malley, and the icing on the cake arrived when Ken Kennedy blasted home from close range to finally breach Kelly’s goal.

It was dominant throughout from John Carmody’s side who picked up just a third Clare Cup in the club’s history to go along with the titles they won in 1981 and 2001. It sent a message too that their sights are very much set on a tilt at the Canon and on this form, it would be foolish to back against them being in the shake up. Inagh-Kilnamona will have to hit the rest button but it will be of concern that they were so flat for large parts of the game. A massive challenge now awaits in the form of Tulla so the focus for Fergal Hegarty and his management will be on making sure they bring a much higher intensity if they are to get back on track.