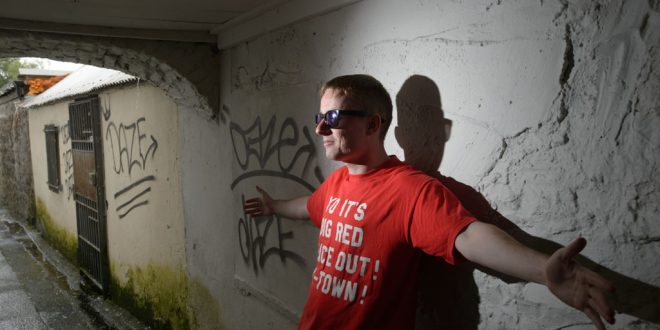 Killian Hogan has two major ambitions in life: to be a professional rap artist and a marine biologist. These two goals are remarkable considering Killian has a mild general learning disability.

Residing in Ballybeg, Ennis, Killian loves making the short trip into the Clare Youth Service office, where he is working on his latest rap song – Gatorade.

Michael Gavin, who works in the Clare Youth Service music studio in Carmody Street, is helping Killian to produce his first professional rap song using all the latest technical musical equipment at his disposal. Killian plans to release Gatorade online on his YouTube channel, BigRed4Eva channel, Twitter and Facebook pages.

He is also on the way to realising his second dream, as he has just been accepted for a place on a level eight course in Applied Fresh Water and Marine Biology in Galway-Mayo Institute of Technology (GMIT).
Killian would like to work in Seaworld, Orlando and realises the benefit of having a third-level qualification when applying for work dealing with marine animals.

Killian learned a lot at St Flannan’s College, where he received great support from teachers, in particular Eamonn Giblin.

Killian loves listening to all types of rap music and cites Professor Green and 50 Cent as his early influences. In 2009, he started writing rap music and would often wake up at night and write down some ideas for new music or lyrics.

He is also making a rap video with Olive Breslin, who is from Ennis but is living in Kildare and Ester Woods, Ballybeg, Ennis. He hopes to release this video over the coming weeks and plans to launch M-town, his next song which isn’t recorded yet, later this year.

Once he is happy with Gatorade, he will start working on a rap album.

“A lot of my friends are into rap music and there is a new Ennis rap group, La Familia. The main rap scene is in places like Limerick City and Dublin. Irish traditional music would be more popular than rap in Ennis,” he said.

La Familia, who are not to be confused with the Romanian hip-hop group of the same name, consists of four lads whose new video sees them rapping at various locations in Clare.
If Killian’s dreams come true, he hopes that young rap enthusiasts will one day be mentioning him as one of their main inspirations.