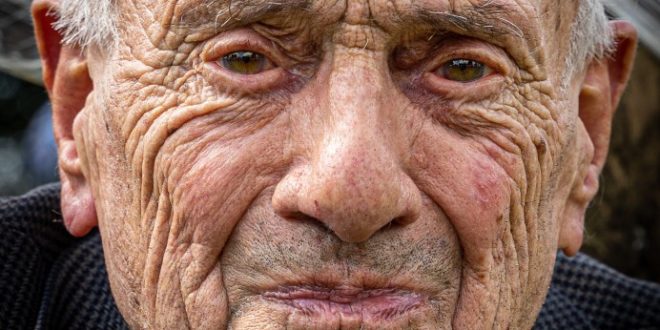 A KILLALOE-based photography enthusiast has taken the top prize in a competition run as part of this year’s Mountshannon Arts Festival.

The event ran over the June Bank Holiday in an alternative format, taking to the airwaves of Scariff Bay Community Radio, as well as YouTube, to ensure continuity on its 25th anniversary.

The “wireless” festival also included the highly popular annual photography competition. Entries were invited on the theme of ‘Identity’ and an exhibition is currently in situ on the windows of Keane’s Bar.

First place went to Siobhán Cahill for her award-winning picture of the late Willie Connors at the Black Bull Threshing Festival in County Offaly. Siobhán, who is a native of County Cavan described herself as “absolutely thrilled” with the win.

“I’m a huge fan of agricultural shows,” she explained. “My father was President of the Virginia Show, and I know the huge amount of work that local committees do. My partner, Robert, and I love to get to the likes of the Bridgetown Show and the Nenagh Show. When we went to the Black Bull Festival in Sharavogue, outside Birr, I was trying out Robert’s new Sony A7 camera. I spotted a gentleman with a wonderful face and asked if I could take his picture. He was so gracious and he agreed to the photo.”

While Siobhán didn’t have the chance to ask Mr Connors’ name at the time, she later got in touch with the Threshing Festival organisers to find out. Siobhán, whose own parents who are aged in their 80s and cocooning on their farm in Cavan, said the picture was particularly poignant in the context of the Covid-19 crisis. “It is so important that we value our older people, and that we should not forget the face and identity of the elderly,” she said.

Siobhán is a horticulturalist by profession and a graduate in Fine Art and also took honours in last year’s Arts Festival photography competition.

The judges who selected her entry this year described the picture as a “superb study of an older man’s face”. “The image displays excellent technical skills, evokes the nature of Identity, and makes a human connection to the subject,” judges said.

Meanwhile, podcasts of the audio highlights of this year’s festival are available on Podbean and on Scariffbayradio.com. These include an evening of stories hosted by Carol McNamara and Órla Mc Govern, with storytellers phoning their stories in live from around Ireland.

The theme was ‘water tales’ and included stories from the seas, streams, rivers lakes and beyond. The podcast highlights also include an interview with renowned musician and cook Mike Hanrahan and Slavek Kwi, creator of The Sanctuary of Free Sounds installation at Mountshannon Harbour. Roisín Bugler’s ‘Flow of Words’ show was a special edition on the topic of ‘Identity’ and featured Michael Durack, Nicki Griffin, Frances Browner, Kieron Concannon, Withrud Duhl, Bernadette Watson and Patricia Donnellan.

On the festival’s YouTube channel, there’s an opportunity to watch a specially-commissioned conversation between former Wexford hurling captain Diarmuid Lyng, who is currently pursuing a sustainable and connected lifestyle, and actor and theatre-maker Timmy Creed. The video is entitled ‘What is the Quest.i.on?’.

Fiona McGarry joined The Clare Champion as a reporter after a four-year stint as producer of Morning Focus on Clare FM. Prior to that she worked for various radio, print and online titles, including Newstalk, Maximum Media and The Tuam Herald. Fiona’s media career began in her native Mayo when she joined Midwest Radio. She is the maker of a number of radio documentaries, funded by the Broadcasting Authority of Ireland (BAI). She has also availed of the Simon Cumbers Media Fund to report on development issues supported by Irish Aid in Haiti. She won a Justice Media Award for a short radio series on the work of Bedford Row Project, which supports prisoners and families in the Mid-West. Fiona also teaches on the Journalism programmes at NUI Galway. If you have a story and would like to get in touch with Fiona you can email her at fmcgarry@clarechampion.ie or telephone 065 6864146.
Previous €440,000 Worth Of Drugs Seized And Two Arrested In Corbally
Next Business owners urged to give asylum seekers a chance